« Terry Bowden to Akron would signal end of the FSU pipeline to North Alabama | Main | Is Notre Dame fired up for the Champs Bowl? The answer from on-campus Irish writer » 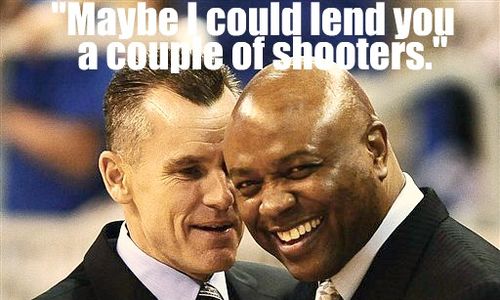 The game between rivals Florida State and Florida was billed as a potent offense against a stellar defense.

Chalk one up for the potent offense. In part anyway.

The Gators had one of the best shooting games any team has had against the Seminoles all season in connecting on 48% of their shots including 10 three pointers.

But it was the 19 FSU turnovers that led to 25 UF points that was the back breaker, culminating in a 82-64 loss by the Seminoles.

The 'Noles led just once in the game, 2-0, on a hook shot by Xavier Gibson to start the game. It would be nearly eight minutes before FSU scored another point. By that time UF had built a 14-2  lead.

FSU was poised to take the lead trailing 14-13 after Terry Whisnant connected on a catch and shoot from the left wing. Three straight turnovers by the Seminoles however allowed the Gators to stretch the lead back to 25-16 with 4:02 left in the half.

The Seminoles did manage to work their way back into the game, 25-23, primarily because the Gators missed six free throws.

Erving Walker however closed out the half with 5 of 6 from the stripe.The last two came with 5.3 seconds left after Ian Miller, seeing his first action of the season, committed a foul 30 feet from the basket.

Once again Florida State pulled itself into a position to take the lead. Trailing by five, Michael Snaer put up an off balance underhand shot that banked in plus the foul to make the score 38-36 at the 16-53 mark.

That would be as close as the Seminoles would get, and turned out to be their last chance to win the game.

UF proceeded to go on a 18-2 run to lead 56-40 with 11:07 to play. During that Florida run Florida State turned the ball over on four of five possessions.

At that point even with that much time left, the game became essentially a matter of margin.

Leonard Hamilton was not pleased with his team's effort saying after the game "we didn't compete very hard .... they were more physical and more aggressive with their toughness."

"I hate to admit it, but we did not compete well", Hamilton said. "We are not doing the things I think we should be doing at this time of the year."

Among those things were once again turnovers and missed point blank shots (11).

"We are not being focused or strong enough with the ball."

After falling to 8-4 on the season Hamilton made it clear that changes will most likely be made.

Look for lineup adjustments along the front line, more than likely Gibson back to the center spot and Okaro White back to the four.

Luke Loucks led the Seminoles with 15 points and Whisnant had a flurry of long bombs in the closing minutes to finish with 11.

FSU shot 41% from the floor and was 90% from the line. However the 'Noles took just 10 free throw attempts indicating the lack of aggressiveness Hamilton mentioned.

The Seminoles will take a few days off for Christmas and return to the floor December 30th to host Princeton. Tip off is at 7:00 PM. There is no television for the game.