« Merry Christmas and Happy Chanukah to Seminoles everywhere | Main | So all along, FSU coaches were looking ahead to next season »

Rees? Hendrix? Two-headed QB? Who'll be under center for the Irish on Thursday? 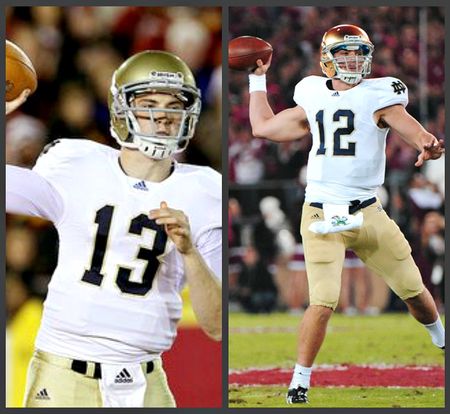 Continuing our series with Douglas Farmer, Editor in Chief of Notre Dame's campus newspaper, we ask who'll start for the Irish and if both QBs will play against the Noles.

"Kelly has said sophomore Tommy Rees will start at quarterback, so there is no wondering there. But what percentage of the snaps will he get? Obviously, that depends on what success he has. So then the questions are: what are Kelly’s initial plans and what will it take for him to abandon those?

I would expect his initial plans to be as they were for most of the season. While Andrew Hendrix did have some success against Stanford, Kelly is very invested in Rees, and thus won’t change his season-long plan after one half of football. Oh, wait, he did that in the season-opener!!

But really, I expect Rees to take the majority of the snaps with Hendrix popping in for 2-4 plays at a time, perhaps every other drive, maybe as often as every drive. Hendrix serves as a change-of-pace to keep the opponent honest. Could he be more? Yes, but I doubt Kelly plans on revealing that against the Seminoles.