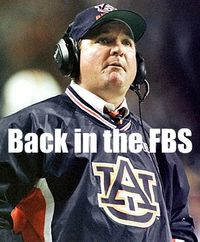 If this report is true, Terry Bowden is the new coach of the Akron Zips of the Mid-American Conference. Terry was a grad assistant there in the mid-80s, hence the connection. Of course, we'd all expect the Akron job would be a two-Bowden deal -- both Terry and younger brother Jeff. But no question this would end a pipeline of former FSU players. While Bowden will try to lure Seminole flunk-outs, misfits and dropouts to Akron, they won't be able to play right away, as they could at UNA. That's because the Zips are an FBS school. Lotsa luck, Terry. Just don't expect Alabama BBQ in the Tire Capital of the World.

&*#$***!! That's the sound of Clemson fans when they see this for the first time 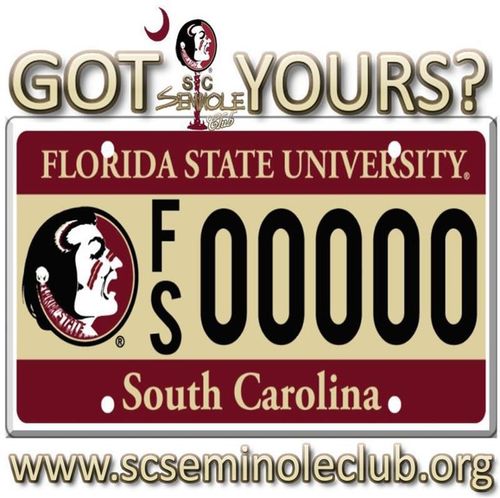 Twitter from Coaching Search.com. Makes a lot of sense if you're Chizik, and an easier guy to get than Stoops. 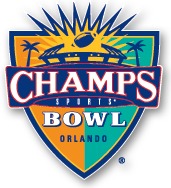 In case you missed it, parking in official lots around the Citrus Bowl was on a pre-paid basis. A bowl spokesman tells us all that parking is now sold out. Alternatives?

Jones High School - Bowl information lists parking at nearby Jones High as a possibility: "ONE first-come, first-served public cash lot at Jones High School on game day (capacity 600), but no other public lots have availability."

Shuttle - Catch a shuttle from the old Amway Arena at 600 Amelia St. (not to be confused with the new Amway Center). You could pre-game party downtown, then drive to the arena and park for $10. Shuttles will run from 2:30pm till an hour and a half after the game.

Don't try to park at the new Amway Center. The Magic will play there at 7pm, further complicating traffic around downtown that night.

Private Lots - Not recommended in the area around the stadium. In fact, the bowl emphasizes parking there is at your own risk.

No ACC refs for the Champs Sports Bowl 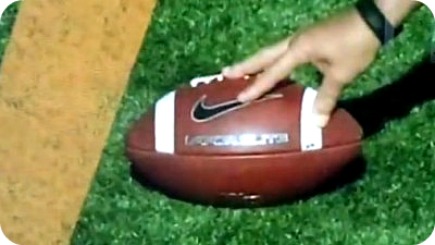 Don't look for Ron Cherry or any of your other favorite ACC officials at the Champs Sports Bowl. A spokesman for the bowl told us that this year's refs will be from the Big 12 Conference. That should be good news for anybody who wants a game that doesn't take 8 hours to play because of lengthy reviews after every other play and includes sneaky, uh..."adjustments" of the ball on first down measurements.

Nole highlights set to "All of the Lights"

The skybox fight was dirtier than the one on the field, plus other nuggets 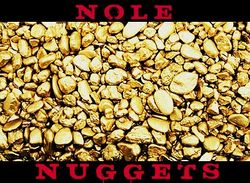 • Seen this? It's a loooooong video that eventually shows a fight break out in the skybox lobby during the FSU-uf game. Apparently two combatants were arrested. Who won? Who cares? FSU won the fight on the field.

• Interesting read here from Rivals' Notre Dame site: a breakdown of the most explosive plays by both teams during the season.

• One member of FSU's defense may be the only Seminole player in the history of the program majoring in creative writing. 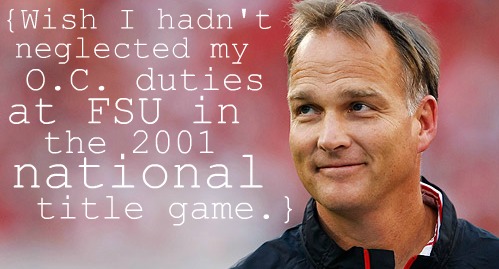 Vince Dooley on 790 the Zone in Atlanta on Wednesday told about offering Mark Richt the head coaching job in late 2000 as FSU was preparing to face Oklahoma in the national title game.

"Mark Richt was very, very interested in the job...When I finally called him and offered him the job, he turned it down. Well, I think it shook Mark (the leap to head coaching) -- all of a sudden the reality’s here. Well, I said, Mark, I’ve got to move on. But if you change your mind before 7 O’clock in the morning, you call me. He called me at 3 O’clock in the morning. He was afraid I might move on before 7. He said, I wanna come. And I said, are you sure? And he said, yes sir." 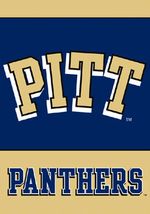 Auburn and their (if you can believe it) $1 million offer is sooooo 18 hours ago. The latest coaching buzz has Mark Stoops on the quick list to succeed Todd Graham at Pittsburgh. Why Pitt? Well, for one it's an hour drive from Mark's hometown (Youngstown, Ohio), so he knows the territory. Second, Pitt is an impressive program for a guy's first head coaching job (with nine national titles over a 120 year history), and headed for the ACC. Third, Pitt could clearly write a bigger check than Auburn. The Stoops/Pitt rumor already has some Auburn folks a little cranky, as in this message board whine:

"His bolting from Pitt has Mark Stoops on the short list of top candidates for the HC position at Pitt... which has completely stalled out our negotiations with him on becoming our new DC."

Man, Stoops' head must be spinning with possibilities. And as the coaching carousel continues to revolve, there could be more.

Will Notre Dame's O.C. do a Mark Richt in the Champs Sports Bowl? We can only hope 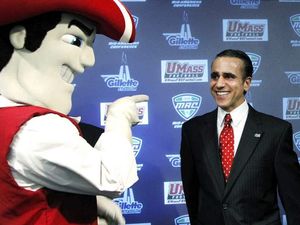 In case you hadn't heard, Notre Dame's Offensive Coordinator and QB coach Charley Molnar is bailing for UMass, where he'll be the new head coach (that's a picture of Molnar about to be bear hugged by a super-sized UMass Minuteman mascot). Molnar is a busy man at the moment, preparing the Irish offense for FSU's defense, while trying to recruit for UMass and hire a staff.

Sound familiar? That's what Noles O.C. Mark Richt tried to do in December of 2000 after accepting the UGA job, and we all know how that worked out. The Noles ill-prepared offense averaging 42 points per game fizzled in the national championship showdown, losing to Oklahoma 13-2.

Stay tuned to see if fate opens a big can of deja vu on the multi-tasking Molnar.