Is Notre Dame fired up for the Champs Bowl? The answer from on-campus Irish writer 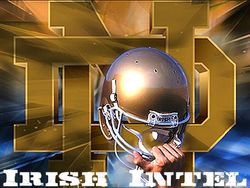 Less than a week to go before FSU's season-ender with Notre Dame in the Champs Sports Bowl. You've seen articles on what the game means to the Noles (here's one). But what about the Irish? Are they anywhere close to being as fired up as their feisty little leprechaun? We wondered when we read this by the Editor in Chief of ND's campus newspaper:

"The bowl game will accomplish little for the Irish in any sense aside from possibly adding another win to the season's tally...The Champs Sports Bowl exists solely to provide an enjoyable nightcap to this up-and-down season."

So we invited the writer, Douglas Farmer, who covers the team for The Observer, if the game is really just a nice trip to DisneyWorld for Golden Dome players and fans. Douglas was nice enough to clarify:

"My main point was the bowl game should not be used as the thermometer for the impending spring practice position battle. But, toward the end of the column, I did write:

In the long run, I do not see the bowl game – or any bowl game to be honest with you – as an accurate clue to the next season’s success. It is one game, played with a month of preparation, by a team which usually looks nothing like it will nine months later. Anything can happen in that situation.

That being said, I do not think Brian Kelly and the Irish see this as a chance to prepare for next season. Rather, Kelly sees it as a chance to get a ninth win, and to end the season on a positive note. Last year, the positive note was his mantra heading into the Sun Bowl against Miami. This year, it has been the ninth win – one more than last year’s final tally.

" 'We want nine wins,” Kelly said after Notre Dame’s season-ending loss to Stanford. “I think that’s an important mark for us. We want to get that ninth win.' "

So, while I may not think much of the bowl game, do not mistake that for Kelly’s opinion. He wants a win, and he wants a win now, not just next year."