« That makes the all-time series 5 to 2 in FSU's favor (so much for the luck of the Irish) | Main | Happy New Year, Noles (looking forward to FSU making some fireworks in 2012) » 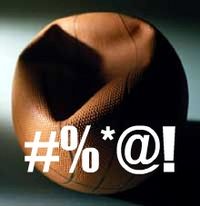 Florida State certainly made it interesting. But after being down by as many as 19 points to the Princeton Tigers perhaps it was just delaying the inevitable.

Clawing its way back, FSU extended the game into triple overtime, had several opportunities to win the game, but could not convert them, eventually losing to the Tigers 75-73.

The first ever triple OT game in FSU history was the first home loss of the season for the Seminoles, who are now 0-3 against Princeton lifetime.

After what was a horrid first half shooting performance that has become an all to common sight to FSU fans this season, the 'Noles erased a 17 point halftime deficit. It took almost the entire second half to do it but Xavier Gibson put back a wild lay up shot by Ian Miller to tie the game at 47 with just 53 seconds left.

The first opportunity to pull out the win was the Seminole defense prevented a game winning shot by the Tigers. Gibson grabbed the rebound that would have given the Seminoles one last possession. But Gibson dribbled the ball off his leg and Princeton got another chance that also came up short.

At the end of the second overtime FSU had three point blank chances that would just not go down, another all too common sight for FSU fans. Bernard James was fouled on the play and went to the line for a one and one with 2.6 seconds left in the extra period.

All James had to do was make the first charity shot and the odds were FSU would be heading to the lock room victorious.

As most FSU fans know, James is just not a good free throw shooter and predictably he missed the front end sending the game into a second overtime tied at 53.

The closing seconds of the second overtime saw Ian Miller (17 points, a career high) sink two freebies, closing the score to 60-59 in favor of Princeton with 30 seconds remaining.

FSU slapped a press on the ensuing possession and the Tiger player attempted a pass to a teammate that was thrown right into Miller's chest. Fouled on the play, Miller went to the line but made just one of two to tie the game at 60.

Princeton put up two shots in the last 24 seconds but missed .... narrowly.

FSU started off the third overtime missing two more free throws (FSU was 11-22 for the game from the stripe), this time by Okaro White. Michael Snaer did give the Seminoles a 62-60 lead on a 12 foot jumper.

Douglas Davis took the lead back for Princeton, 63-62, on a three pointer from just right of the key, despite being well covered by Snaer. A goal tending call on James upped the score to 65-62.

Luke Loucks made his first basket of the game count by nailing a three from above the key.

Douglas nailed another three with 1:15 left to make it 68-65 and essentially put Princeton in the driver's seat.

With 35 seconds left Gibson missed a lay up but got the rebound. His outlet pass to the back court was picked off however and a slam dunk in transition was finished off by Ian Hummer's offensive put back.

Snaer, who scored all of his 20 points in the second half with 11 coming in the extra periods, canned a three from the left wing to make it 70-68. But with time running out, just 25 seconds, FSU had to foul and Princeton missed only one of its six attempts to lead 75-70.

Loucks' meaningless three at the buzzer made the final margin of defeat just two points.

In the first half FSU shot an abysmal 16.7% helped along by the insistence of the Seminoles to launch three pointers ... eleven of them to be exact, none of which found the bottom of the net.

Obviously Leonard Hamilton had a talk with his team at the half and the 'Noles came out with much more aggressiveness, attacking the basket rather than settling for the three point shot. The result was a blistering 60% from the floor in the second half.

While the Seminole defense held Princeton to 41.5% shooting, the Tigers made the shots they needed to make at the right time, never seeming to panic as the Seminoles continued to close the gap.

Joining Snaer and Miller in double figure was Locuks with 10 points.

Hummer and Douglas both finished with 25 for the Tigers

Next up for the 8-5 Seminoles is Auburn on Wednesday in Tallahassee. Tip off is set for 6 PM and will be broadcast on ESPN3.com.