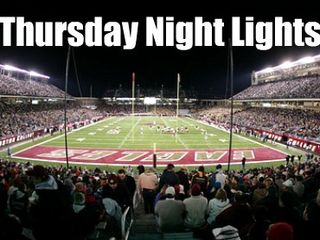 A change in coordinators and more stability at quarterback has not equaled more offensive production for BC so far this year. That has been partly due to injuries, which will be discussed later, but also due to an overall lack of talent and depth at certain spots. Thus far, BC ranks just 73rd in rushing offense, 101st in passing offense, 104th in total offense, 107th in scoring offense, and 113th in passing efficiency. Needless to say, it is no surprise the Eagles have just two wins thus far.

The coaching staff expected sophomore QB Chase Rettig to take a big step forward and provide the stability at the position that has been lacking since Matt Ryan left Chestnut Hill. While Rettig (1,394 yards, 52%, 7 TDs, 7 interceptions) has provided stability by starting all 8 games, he has not progressed as much as the coaching staff hoped. Rettig has not been overly accurate and still has a tendency to force passes. That being said, he has been hampered by an inconsistent offensive line, a lack of depth at receiver, and injuries at all offensive positions.

Running back was expected to be a strength, but an injury limited returning star Montel Harris to just 3 games and it was announced recently that Harris, who is out for the year, will seek a medical redshirt. In Harris’ place, Andre Williams (405 yds, 4.5 average, 4 TDs) stepped in, but he was recently replaced by Rolandan “Deuce” Finch (509 yds, 5.2 avg, 3 TDs, 7 receptions, 73 yds), who rushed for over 200 yards against Maryland. It is hard to say if that is a product of BC’s running offense getting better, taking advantage of Maryland’s atrocious run defense, or both. Either way, BC will try to lean on its ground game.

The WR corps has not been hit as hard with injuries as other units, but senior Ifeanyi Momah was lost for the year after catching 8 passes in the opener. The unit was bereft of depth to begin with and that didn’t help.  That has left the onus on Colin Larmond, Bobby Swigert, and Alex Amidon to produce. Larmond (26 recs, 443 yds, 17 avg, 2 TDs), who missed all of last year due to a knee injury, is the best of the bunch and a big-play threat.  Swigert (31 recs, 291 yds, 9.4 avg, TD) leads the team in receptions and is a good security blanket, although he is battling a shoulder injury. Amidon (13 recs, 117 yds, 9 avg, TD, 89 yds rushing, TD) has speed to burn despite his modest stats. Helping out the short-handed WR corps are tight ends Lars Anderson (7 recs, 53 yds, 7.6 avg, TD) and Chris Pantale (12 recs, 106 yds, 8.8 avg, TD).

Traditionally one of the best units in the ACC, the BC offensive line has been average at best this year, partly due to injuries. The LG and C spots have seen differing starters due to injury and LG Nathan Richman is out for the year. The rocks of the line have been junior LT John Wetzel, sophomore RG Ian White, and junior LT Emmett Cleary. All three have started every game this season. Senior C Mark Spinney started twice at LG but has since taken over the pivot, starting the last four games at that spot. The most troublesome spot has been LG, where Spinney, Richman, and now redshirt frosh Bobby Vardaro have started. The FSU game will be the fifth straight game using the same offensive line so the coaches hope this unit has started to turn the corner.

The Eagles’ defense has for many years been the strength of the team and it is again this year, even if only by default. This year, though, the defense has not been that stellar either. The defense has been forced to keep BC in games due to the poor offense, but youth and injuries have exposed a lack of depth. BC currently ranks 51st in pass efficiency defense, 54th in scoring defense, 75th in rushing defense, 88th in total defense, and 96th in pass defense. Perhaps most troublesome, BC ranks just 94th in tackles for loss and 120th in sacks at less than 1 per game.

As injuries go, BC’s defensive line has been as ravaged as FSU’s offensive line. Projected starting tackles Kaleb Ramsey and Dillon Quinn are out, as is backup tackle Connor Wujciak and fellow backup Conor O’Neal has been slowed by an illness recently and is questionable for the FSU game. That leaves redshirt freshman Dominic Appiah (15 tackles, 3 for loss) and true freshman Max Ricci (5 tackles) as the starters and sophomore Jaryd Rudolph (6 tackles) the main backup. Appiah has started the past four games in place of Ramsey and then O’Neal while Ricci has started the past two in place of Quinn. All of the tackles have good size, but are obviously young and inexperienced prior to this season.

The situation at end is not as dire, although senior Dan Williams, who was battling for a starting job, was lost for the year to injury. Still, junior Max Holloway (29 tackles, 5.5 for loss, 2 sacks) and sophomore Kasim Edebali (19 tackles) have started every game this year, although they haven’t provided much of a pass rush and are a bit undersized. Depth is provided by true freshmen Mehdi Abdesmad, who has only appeared in 2 games, and Brian Mihalik (3 tackles, 1 sack).

The LB corps, likely the strength of the entire team, had avoided the injury bug, but sophomore Kevin Pierre-Louis was injured against Virginia Tech and is expected to miss the rest of the year. Pierre-Louis is a big loss as he was second on the team in tackles and third in tackles for loss this season. BC can rely on star MLB Luke Kuechly though. Kuechly (130 tackles, 8.5 for loss, 2 ints.) is one of the best defensive players in the country. Junior Steele Divitto (44 tackles, 2.5 for loss, 1 sack, 1 int., 4 passes broken up) has started all 8 games on the strongside and the coaches are very high on him. Taking Pierre-Louis’ place on the weakside is true freshman Sean Duggan, who made 8 tackles in his first start against Maryland. Duggan (23 tackles, 1.5 for loss) isn’t big, but he has good speed and range. BC does have good depth here with junior SLB Nick Clancy (17 tackles, 1.5 for loss), senior MLB Will Thompson, and sophomore WLB Andre Lawrence.

Surprise, surprise—the secondary has been hit by injuries as well. The safety spots have been the biggest problem, due to both injuries and suspensions. That has left true freshman SS Spenser Rositano (29 tackles) and junior FS Hampton Hughes (27 tackles, 2 for loss, 1 int.) as the starters. At least BC has some experience at corner where senior Donnie Fletcher and junior Jim Noel start. Fletcher (23 tackles, 2 PBU) has NFL talent while Noel (30 tackles, 3 for loss, 1 sack, 1 int.) has size and experience at both corner and safety. Due to an injury to C.J. Jones, the Eagles have had to rely on true freshmen Al Louis-Jean (14 tackles, 1 int.) and Manny Asprilla (10 tackles, 2 PBU) for depth. Because of all the injuries and youth, it is no wonder BC has struggled against the pass.

BC has struggled in this area as well. Kicker Nate Freese has hit on 9 of 14 field goals, but has struggled with short-range kicks. Punter Ryan Quigley is averaging just 38.8 yards per punt. The return units haven’t been impressive either, ranking 89th in kickoff returns and 113th in punt returns.

Even despite all the injuries, BC has hung tough, losing to Northwestern, Duke, and Wake Forest by a combined 16 points. On the other hand, BC was blown out by UCF and normally wouldn’t lose by any margin to Duke and Wake. Injuries have certainly played a role, but the offense has not improved as much as hoped either. The defense, which did bounce back against Maryland, has been hurt more by injuries than the offense and will have to rely on players expected to be backups at several positions.

Even with the short week, FSU should win this game. The Seminoles would have more talent than BC even if the Eagles had all their players, but with all the injuries along the front seven, one has to think the FSU offense should have success. BC’s offense has struggled all year, racking up more than 19 points only against FCS UMass and Maryland, who has one of the worst defenses in the country. I would be shocked if BC was able to consistently move the ball against FSU. The Seminoles defense has shown since the Wake Forest game what they can do when properly motivated. I don’t expect a shutout like the NC State game, but I think FSU should win this game comfortably.