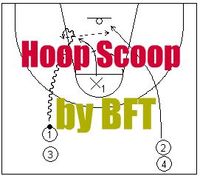 Forty five second remained when Luke Loucks stepped to the line but missed both freebies.

A hard nosed defensive stand prevented UConn from making it a two possession game; and with James collecting the rebound and time running out, FSU raced the ball quickly up the floor. Leonard Hamilton elected not to call his final timeout and let the play continue. Snaer pulled up just left of the key and launched a three ball that clanged off the rim as the buzzer sounded, thus ending the upset bid.

“It’s a shot I feel I would normally have made,” Snaer said. “I had a pretty good look but couldn’t finish it.”

Save for one brief lead, FSU trailed all of the first half and once again was having difficulty finding the bottom of the basket (29%). Meanwhile Napier was busy lighting it up with 15 first half points. Still the Seminoles found a way to hang around and were only down 37-30 at the half, mostly due to Deividas Dulkys 8 points in the first twenty minutes.

Over the first nine plus minutes of the second half, the Seminoles kept making mini runs at the Huskies. UConn responded every time however and eventually opened up a ten point lead, 59-49 with 10:48 left.

FSU quickly closed it to 59-55 after Dulkys nailed a three from the right corner and Snaer was fouled on a layup from the right side for the three point play.

Dulkys added another three, and after a Xavier Gibson layup and a James slam dunk off the lob from Peterson, Gibson tied it at 65 all on a wide open three pointer from above the key.

Drummond had a chance to tie the game but missed three straight free throws.

Snaer could have made it a two possession game when he stepped to the line. After making the first of two shots, TV announcers commented on Snaer's free throw prowess, whereupon he promptly missed the shot.

Okaro White had his opportunity from the line to make it a four point lead with 18 seconds left. But just as Snaer did, White sank only the first of two freebies for a 71-68 lead, setting up the game tying free throws by Boatright.

UConn's sharp shooters were deadly for much of the game. At one point in the second half the Huskies were 54% from the floor and 56% from behind the arc, and even as high as 64%.

The FSU defense pulled itself together enough to cool off UConn's shooters (that and probably some fatigue after playing three games in three days), bringing them down to 48% shooting and 44% from the arc.

The Seminoles started finding the basket and shot 43% and connected on 9 of 19 threes, led by Dulkys' 4 of 5.

Snaer finished the game with 20 points, with Dulkys adding 14. James had another double double with 11 points and 14 boards.

Free throw shooting was excellent until the last seconds of regulation and overtime with the 'Noles making only 2 of 6 attempts. For the game FSU was 15 of 20.

The Seminoles fall to 5-2 on the season and will next take on Michigan State in East Lansing in the ACC/Big Ten Challenge. Tip off is Wednesday at 7:30pm and will be shown on ESPN.