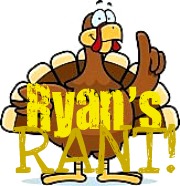 It is the holiday season, and as we all plan to get together with our friends and loved ones to celebrate and feast, it’s time to look back and remember what makes us happy.  Even though FSUs season has been a disappointment to most, there are still positives we need to take away from this team, and be thankful that we’re not worse off than we are right now.

So without further ado, I am thankful for:

Defensive Coordinator Mark Stoops: When Stoops signed on to become the Defensive Coordinator, he took on a whole lot of talent, but not a lot of efficency. In a mere two years, he now boasts a top ten defense statistically, reminding fans of the FSU defense of years past.

QB Clint Trickett: Even though he went 0-2 as a starter, Trickett performed admirably in his relief appearance when starter EJ Manuel went down, and kept FSU competitive in every game they played. With a little more seasoning, I am confident when Manuel graduates, Trickett will be ready to take the reins.

DEs Brandon Jenkins and Bjoern Werner: The bookends have made life miserable for opposing teams. They have a combined 13 sacks, which is more than 8 Division-1 Football Programs. Beyond that, these two are in the backfield on almost every play, and both have more than enough potential to be playing on Sundays in the future.

How Florida was ordered to play Florida State 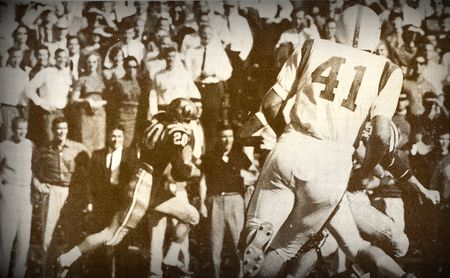 It would be difficult to fully comprehend the struggle that Florida State University endured to schedule a football game verses the University of Florida without first explaining the birth of the animosity between the two schools.

House Bill No. 361, commonly know as the Buckman Act, condensed all state universities into three schools.

Florida A&M School for Negroes, as it was known in those days, was established and it also was located in Tallahassee.

The University of Florida was moved from Lake City to Gainesville.

The Schools operated in their segregated modes for the next thirty-eight (38) years, but World War II began to make Florida Lawmakers rethink their stance on gender segregation.

The war had created a gender imbalance. The University of Florida, had empty buildings and half-empty classrooms, while FSCW was experiencing over-crowded conditions.

The idea of establishing coeducational institutions first officially came up for debate when the State's Board of Control met in March of 1945. There was ample justification to make such a move, but the Board tabled the matter.

The State Legislature remained concerned, but they likewise failed to act on the matter.

The end of World War II changed all of that.

Continue reading "How Florida was ordered to play Florida State" »

Give yourself a hand, Nole fans

If you're looking for a little good news on the football front, Florida State fans did their part this season. Average attendance for all 2011 home games was 77,841. It was the best since 2008. This season's crowds ranged from a low of 72,226 against Louisiana Monroe to a high of 84,392 for Oklahoma -- the game that set the mark for all time largest attendance in the history of Doak Campbell Stadium.

Reptiles focused and feeling it 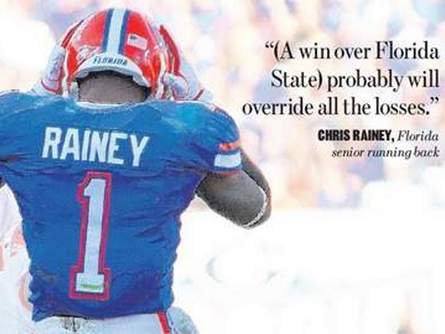 This story from the Gainesville Sun is fair warning that the team Nole fans love to hate, sees -- and is getting amped up to seize -- the opportunity on Saturday. The benefits of a win against their major in-state rival is being teed up in the players' minds. Guys are buying in. Their eyes are on the prize.

A win for either team means redemption for a disappointing season. It's just a matter of who wants it more. And right now the reptiles appear to have grasped that idea with feeling. 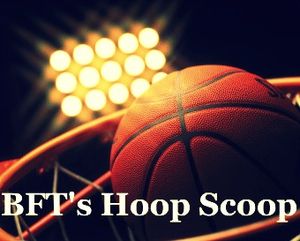 Sunday's defensive effort was a far cry from the one FSU fans saw on Wednesday night against Stetson. Proof of that was in the shot clock where the Seminole defense forced the Jaguars into three shot clock violations in the game and held South Alabama to just 24% from the floor.

Even more impressive was the 0-24 the Jags shot from behind the arc.

The difference in this game was a ferocious interior defense, where the taller and more athletic 'Noles swatted away just about everything the Jags put up from anywhere around the paint, finishing the game with an astounding 14 blocked shots. Add to that rotations were much improved and the FSU defense baited USA into poor passes that were often picked off or disrupted.

At one point in the first half and the score at 22-12, FSU did not allow a USA basket for nearly nine minutes. By the time the Jags did connect from the floor FSU had run the score up to 42-21 with 2:59 left in the half.

It was pretty obvious at that point there would be no miracle comeback by the Jaguars. 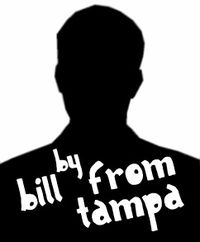 1. Someone apparently forgot to give Mike London the script. 1995, then 2005, THEN 2015. Not 2011. Somebody please check Virginia's calendar to make sure they are using the Gregorian version.

2. As Gene Deckerhoff said right before kickoff at Doak S. Campbell Stadium at Bobby Bowden Field at (the eventually to be named I'm sure) Gene Deckerhoff Press Box (congrats on number 400 Gene, may you call 400 more, which would be somewhere around 2043, he'll still be calling FSU games then right?) "Renegade sure looks good tonight." Well, at least something looked good last night.

3. As I understand it the theme for this year's homecoming was "A Seminole State of Mind." I was saying following the game that the Seminole state of mind would be classified as stunned.

4. Following a first quarter that saw that well respected and certainly on the ball ACC officiating crew miss a horse collar tackle of Rashad Greene, a catch by Rodney Smith called incomplete, and who knew it took so long to spot a ball for a punt ..... my guess is many of the fans in DSC@BBF@GDPB were wishing that William Davenport and his crew was sitting on one in some living room somewhere.

5. After bringing down Bert Reed at the Virginia one yard line, we now know how Chase (as in he just chased him down) Minnifield got his name. Frank obviously knew what he was doing when he named his son.

6. Summing up the crisply moving along game, helped along by the once again stellar competence of the ACC refs, Deckerhoff summed it up by saying, "A series of injuries, delays, and replays, has made this first half last a month." Now for those of you that like to record the game, I sure hope your DVR had that much space available.

7. I have discovered a get rich quick idea. It's virtually guaranteed to put money in my pocket. Here's the idea. Direct a little discretionary income to your local short term investment broker, placing said investment on the proposition that every time the ball is punted to FSU you are going to see a flag on the return team. Certainly not guaranteed to pay off 100% of the time but it's reasonable to think it will 99.9% of the time. So just keep this sure money maker between you and me, ok?

9. I'm not sure. I could be wrong. But I could swear that following that final field goal attempt from the literally golden toe of Dustin Hopkins (he reportedly not only painted the shoes but actually painted his toe gold as well), I heard the mics in the stadium catch much of the crowd do their best impersonation of Lee Corso on Gameday. On second thought that could have been me while sitting in the living room watching the game (not with the aforementioned Davenport BTW).

10. Just a guess, but in those final seconds emotions of everyone in Doak were up and down and back up then down again then up only to .... well, you get the idea ... faster than a yo-yo.

• FSU held UVA to a season low rushing total of 78 yds. including just 7 in the first

• In his final home game Bert Reed makes the longest catch of his career -- a 68-yarder in the 3rd quarter.

• Ditto for Nigel Bradham, bowing out with a career best 13 tackles.

• Shawn Powell does his best to give the Cavs lousy field position, punting six times for a 50.3 yd. average.

• Rashad Greene’s 53-yard end around was FSU’s longest run of the season.

• If any good comes out of this letdown that the Noles had every chance to win, it's the hope it fires them up to make amends Saturday in hogtown. 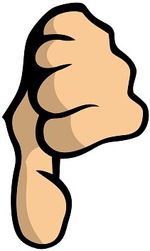 • Except for that last point, none of the above matters very much in light of the final score.

• FSU usually plays one real stinker during the season and this was it.

• 94 yards of ugly penalties, the icing on this upside down cake of a game.

• The Noles aren't dominant enough yet to play uninspired and sloppy but still manage to pull out a win.

• In a game where the ACC refs appeared more determined than ever to screw FSU, how ironic that the men in stripes gave the team one final chance when the clock said game over.

• Forget that crap about Virginia being a classy school of gentlemen. Not when a Cav lineman blasts FSU's Timmy Jernigan -- in what sure looked like a hit to the head -- after T.J. had lost his helmet and was in full gallop downfield. Wonder how UVA founder Thomas Jefferson would feel about that cheapest cheap shot of the season? 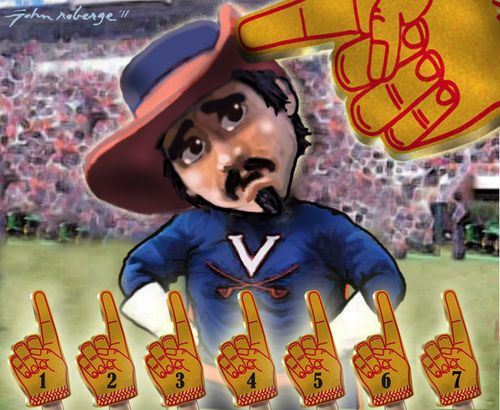 The game will "come down to the FSU WRs vs. UVa DBs," says Cavs blogger 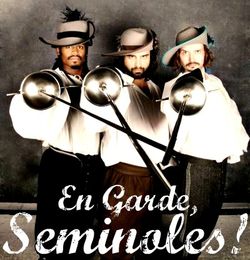 Welcome Hamilton from the Cavalier site Lambeth Field, who rocks our five questions with great answers.

What are the key reasons the Cavs improved steadily through the season?

A: The big key this season has been the ability to recognize the strengths of this team, and playing to them. The offense revolves around the ground game and the ability of Rocco to manage the game from the QB spot. When UVa was rotating quarterbacks it led to Michael Rocco getting out of rhythm and made him force some balls into
bad situations. He looks much more comfortable in the pocket now.

Defensively, this team has done a 180 in their rushing defense from a year ago. While teams were steamrolling us on the ground in the first year of the 4-3, that is not the case this year, and are starting to show some depth in the front 7. All the other factors go into that as well, like time of possession and ability to have sustained drives. It shortens the game and allows the Hoos to hold leads late. Both rushing and defending the rush are keys to every game here on out.

How would you describe UVA's offensive attack?

A: It is about as straight up as a Pro Style as you can get. They will rush the ball most of the day with one of 3 different running backs: Junior Perry Jones, RFr. Kevin Parks, and Fr Clifton Richardson. FB Max Milien will do a little bit of everything when he is in the backfield, but he has been used in the pass blocking and passing game most often this season. Kris Burd and Tim Smith are the veterans in the receiving game, but Dominique Terrell and Darius Jennings, both true freshmen, will get their rotations in the game, and the Hoos will look to the tight ends sparingly throughout the game. They will be effective if they can run the ball all game, especially when they get outside the tackles or with a pulling guard. The offensive line is massive and have not allowed a sack in a month.

Will we see any 3-4 alignment from the UVA defense?

Continue reading "The game will "come down to the FSU WRs vs. UVa DBs," says Cavs blogger" »