« TomRob's UPDATED Boston College Preview | Main | Eagle from Atlanta on B.C. gaining confidence: "Maryland gave them a blueprint on how to win" » 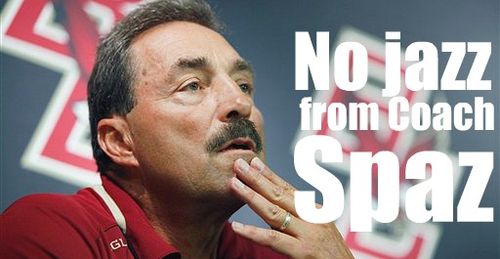 Q. How does your practice week differ when you're preparing for a mid-week game after playing the previous Saturday?
SPAZIANI: Well, for us, we usually take Monday off and practice on Sunday so what we did is we altered our Sunday practice a little bit, and tried to do a little more, and practiced on Monday. We had a conflict with some classes, so that was a little bit of a problem and then we went a little bit lighter in gear, that is, Tuesday and then here we are Wednesday ready to go.

Q. Does that motivate your team now that you're coming off your first conference win of the season?
SPAZIANI: Well, you know, does it motivate them? We try to be
motivated every week, but certainly our confidence level should be a little bit better, knowing that we have accomplished something, sure.

Q. How do you sustain that (running game) against the No. 1 rushing defense in the ACC?
SPAZIANI: Well, it will be a different level of intensity over there. And certainly, it will be quite challenging to say the least. They do have quite talented people over there in their front seven and in their back end, also. So it's going to be a big challenge but once again in order for us to win any game, we have to be successful running. Now that's the key word; what is successful? So we are going to have to get some yardage and keep them off balance a little bit.

Q. Do you have somebody that you -- an emergency back in case something happened to Deuce?
SPAZIANI: Well, you know, Andre (Williams, 6-0, 216lb. soph.) is not out. So that's the first thing. I don't know where you are with that. But that will be a game-time decision and then we have got (Mike) Javorski and we have (Donte) Elliott. You know, we have -- it certainly hurts our efficiency, but there's things we can do and we will just have to decide some different areas.

Q: There’s one thing from that win last week that you could put in a bottle…is there one particular thing that was the most encouraging to you?
SPAZIANI: There are a lot of things. I think we have been playing a little bit more with emotion as the season has gone on. This team is young and they were growing. They played with emotion and they were physical. And that is what we need to do as we go through the whole year. As a coach, you like to see that momentum continue in that area; it has, and we certainly need more of it, and again, against a quality opponent like, this you have to be mentally right, that's for sure.