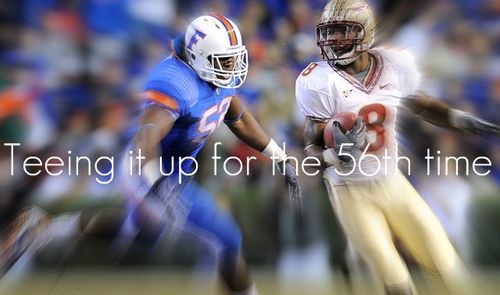 I knew the transition would be difficult, but didn't expect it to be this difficult -- though they haven't been that far from a good season. There are three games -- Auburn, Georgia and South Carolina -- that they could have won, but just didn't make enough plays down the stretch. If they'd made, say, four plays, they're coming in at 9 and 2 and everybody has a different view. Not unlike FSU with Oklahoma, Clemson and Wake Forest.

With both offenses struggling, will this be a defensive battle?

Dooley: It could comes down to Charlie Weis against Mark Stoops. Although, Florida's defense hasn't played that poorly. They just haven't gotten turnovers.  They get tired because their numbers are down, so guys are playing 60 to 70 plays. And I have a lot of respect for FSU's defense. But again, you're talking about two quarterbacks who haven't lived up to the hype, as well as two offenses that haven't lived up to the hype. So I think it's going to be a 20-14 type game.

Do you think Charlie Weis has made the most out of his playmakers, Demps and Rainey?

Dooley: I think he's fallen in love with those guys in terms of any time they get the ball they can break it. Like, if we give it to them 25 times and we break two, that's two touchdowns and that could be good enough.

Will Coach Weis have any surprises in his offensive game package?

Dooley: There haven't been a lot of gimmicky plays with Charlie Weis, They have them in, but whether they run them or not is the question.

Will next year be even more of a challenge because the gators won't have Brantley, Demps and Rainey?

Dooley: But everybody else is back. I talked to Will about that. They feel like they're going to be better next year because they only lose a handful of guys. They'll be a different looking team, though. I think they'll be bigger at tailback. They've got some running backs coming in that are big time recruits.

Will Jeff Driskell get it together to become the starter at quarterback?

Dooley: They're going to open it up in the spring. Both (Jacoby) Brissett and Driskell will battle it out. My guess is they won't name a starter till he walks on the field for the opening game, so it's going to be one of those two guys.

Speaking of Muschamp, he's had some real meltdowns on the sidelines.

Dooley: Well, he's emotional, but he's toned it down a bit. I think he's learning to be more of a head coach and less of a defensive coordinator. Muschamp has a clear focus. He's trying to clean up some messes.

Will Florida fans be patient through the growing pains as the team transitions to his system?

Dooley: Gator fans patient? Those two words don't belong in the same sentence. No, they're not going to be patient. But I think the athletic director is and that's all that really matters.