« Noles versus Irish in the Champs Bowl? | Main | Gator kicks a Seminole instead of the football » 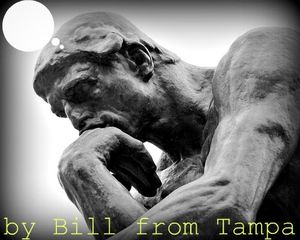 11. I mean really, beating a bad gatros (their ...) aka crocs of XXVI team in Hogtown and you're complaining?

12. Tell the truth now, didn't you REALLY miss having ACC referees officiate the game and the 57 "the previous play is under review's" that comes with them?

13. With the number of players going down to injury on Saturday night I fully expected to hear an announcement over the PA system ...."Paging Florence Nightengale .....paging Miss Nightengale .... "

14. Well, at least we know Matt Elam has a future career in the WWF.

15. Best sign seen at ESPN's Gameday show: "This is a poster". Enough said right there.

16. So Maryland fired the 2010 ACC Coach of the Year to bring in a coach to led them to a 2-10 season and in the process gives up 35 points in the final quarter of the final game of the year for the Terps. But gosh, they looked so darn good in those brand new unis in doing it.

17. The wit and wisdom of Mrs. BFT: In attending the local high school football playoff game Friday night came the PA announcement that this was the proverbial "win or go home" game. Came the response from Mrs. BFT to no one in particular, "Isn't the other team from Orlando? Aren't they going home anyway even if they do win?"

18. Good statement game by Virginia with a spot to the ACCCG on the line. FSU must have worn out the Cav's offense from the week before.

19. Could not help but notice Bob Davie doing color for the FSU/gatros (their ....) aka crocs of XXVI game (BTW, Bianchi, FSU won the game, the key word there being WON). Maybe it's just me, but doesn't Davie have something else to do .... like maybe hire a coaching staff, call prospective recruits, etc for his new gig at New Mexico?

20. I wonder if Urban Meyer will be required to wear sweater vests IF (wink wink) he takes the Ohio State job?