« Who's afraid of the big bad Wolfpack? | Main | A Seminole Shutout edition of Postgame Pluses and Minuses »

Sniffing up the Wolfpack trail with James from Riddick and Reynolds 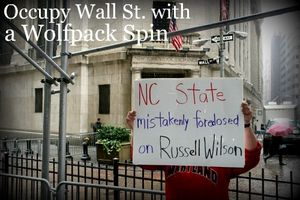 Check out their site after reading James' responses to our questions.

The Wolfpack was devastated by injuries early in the season. How many starters are back and healthy?

A: Not to be snarky, but "not enough." Or perhaps "not as many as we thought after the bye." We lost a ton of folks in the first half of the year and anticipated getting some of those guys back into the lineup coming out of the break at the midway point. But somehow we found a way to rest the roster 14 straight days without anyone actually healing. Anticipated 1st-string tailback Mustafa Greene is shut down for the year, there are guys like fullback Taylor Gentry that could possibly be done for the year...it's as bad as any of the other injury plagued seasons we've seen under O'Brien to this point.

N.C. State leads the ACC in interceptions with 15 on the season. Has the secondary has become the strength of the defense?

A: Yes, and more specifically, David Amerson has become the star of the defense. Amerson is cashing in on one of the main tenants of the zone defense: generating turnovers by reading and reacting to the action of the quarterback. As one of my podcast mates, Austin Johnson, said the other day, what Amerson lacks in terms of one-on-one coverage skills, he more than makes up for in anticipation and instincts.

The turnovers he and his cohorts in the defensive backfield create are critical given how dinged up our defensive line is. Their general inability to get to the quarterback has required more blitzing and, in turn, left the secondary more vulnerable to passing routes underneath. We're seemingly good for one of two outcomes: either the opposing team marches down the field methodically or we get a turnover.

But the Virginia game showed some signs of life from our defense to stop not only the pass but the run, as well. We saw last night and against Georgia Tech two weeks ago that Virginia can run that ball against good teams, and yet State was able to keep Virginia's running attack in check for the most part. For a team trying to stop teams in ways OTHER than with turnovers, it was a performance State fans were happy to see.

With the win over Virginia, is the team mentally and physically at their best since the start of the season?

A: Mentally? I'd say that's a safe assumption. Physically, we're still missing a lot on the defensive line, so I'm not ready to go that far just yet. The good news is that we didn't have any new additions to the injury report yesterday, so we just need to avoid freak injuries during pregame warmups--ever heard of a concussion suffered pregame? Neither have we.

Who would you say are the Pack’s MVP’s on offense and defense so far this year, and why?

A: The offensive MVP, in my mind, is Mike Glennon. After waiting patiently for three years for his turn and then finding himself one of the focal points of perhaps the most public quarterback controversy in the country, all Glennon has done so far is toss 19 touchdown passes against just six interceptions, thrown for 1700 yards and routinely put the ball on the money to his receivers at a level unbecoming of a guy who's only started seven game in his career. Lesser quarterbacks would've wilted under the kind of pressure he's faced so far and yet he's responded.

A: Somewhat, though probably not to the degree I think most folks assume outside the city walls of Raleigh. Certainly the strong play of Mike Glennon thus far has made the rift a little less pronounced, but there's no doubt it hurts a great deal when you see Wilson doing what he's doing at Wisconsin and not in Raleigh. I think, when you get past the emotion of the situation and look at the circumstances facing O'Brien at the end of last year, the decision makes sense. O'Brien was facing the possibility of a scenario unfolding where Glennon transferred (utilizing the same rule Wilson used to play right away at Wisconsin) in response to the potential of Wilson returning for his final season, only to see Wilson catch fire in Minor League Baseball and stick with baseball. Suddenly, O'Brien is stuck relying on his third-string quarterback to lead the team with no real option at backup. Personally, I've written the whole Wilson vs. Glennon debacle off to bad timing...if Glennon is a true junior instead of a redshirt junior, none of this is even an issue. Wilson wraps his career up in Wolfpack Red and Glennon takes the reigns in 2012. That's life, as they say.