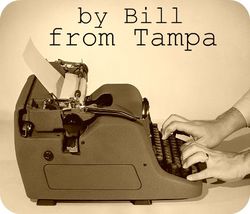 1. Florida State apparently really likes the numbers 41 and 16. Duke and Maryland .... not so much.

2. After last playing a game at Bobby Bowden Field at Doak S. Campbell Stadium (otherwise known as BBFaDSCS) on September 24th 35 days ago, there is no truth to the rumor that the team forgot where the home locker room was.

3. From Mrs. BFT, “They have thirty something combinations of uniforms and they came out with that bland ensemble?” Well, as sideline reporter Tom Block said, “Let’s hope we don’t see all 34 combinations of them today.”

4. And speaking of sideline reporter Block, who noted the weather, “I’ve turned my head 360 degrees and all I see are blue skies.” We trust that was not ala that girl in the “The Exorcist” because if it was I think we just found some pre-game and/or halftime entertainment. Or maybe even post-game.

5. And if you know Tom, FSU's sideline reporter, you know he will never be mistaken for a center of a basketball team. So the sideline pre-game interview with FSU’s 6’10” Bernard James had to be an interesting sight. Good job, Tom, getting the mic up that high.

6. From Gene Deckerhoff, commenting on Tim Jernigan’s pressure on CJ Brown resulting in .... shall we say a somewhat off target pass .... “If I see Timmy Jernigan breathing down on me I’m getting rid of the ball early too.” Being age 66 I’m sure would have nothing to do with it either.

7. Oh sure, the referees see a phantom fair catch signal by Greg Reid but a horse collar tackle of Kenny Shaw right in front of the ref they don’t see. If there was ever a clear signal for an eye checkup certainly for that crew that was it. Either that or take the popular route with many FSU fans these days and head to another conference where we all know the officiating is better, right? Just ask Michigan State fans. Well, come to think of it, they are OK with replay officials.

8. In the You Could See It Coming Department, ABC flashed a graphic that Dustin Hopkins was one field goal short of tying the school record for consecutive kicks. The predictable outcome was .....
A. He made the kick
B. FSU ran a fake field attempt
C. He missed the kick
D. He would have liked to kick whoever put up that graphic in the rear end

9. From William Floyd on Telvin Smith’s blazing fast sack of Brown, “That was like a lion closing in on a wildebeest.” Well, he is a color analyst after all and that was certainly color you don’t hear very often.

10. And as radio play by play man Tom Block said (wait ..... wasn’t he on the sideline?) “Nigel Bradham just introduced himself to CJ Brown.” CJ could have done without the introduction I’m sure.

11. And speaking of big hits, we are absolutely sure that if you look closely you will find the imprint of James Wilder’s shoulder pads on that Maryland safety. Pretty sure he could have done without that intro to James as well.

12. As you probably know, Purdue boasts of having the world’s largest bass drum. So, the best dressed fan award goes to that Purdue fan decked out in nothing but ...... a bass drum.

13. And as UCLA fans bid what is sure to be NOT a fond farewell to Rick Neuheisel, who will receive a copy of the home game (aka a biiiiiiiiig contract buyout) after his team’s dismal defeat to the previously 1-5 Arizona Wildcats …… well, that streaker and subsequent on field brawl made it worth investing your time in watching the first half at least.

15. Stat of the weekend: Utah in a loss to Cal held to 13 yards on 26 carries. We're thinking Utah has something to work on in practice next week.