Pulling in for a Mid-Season Pit Stop 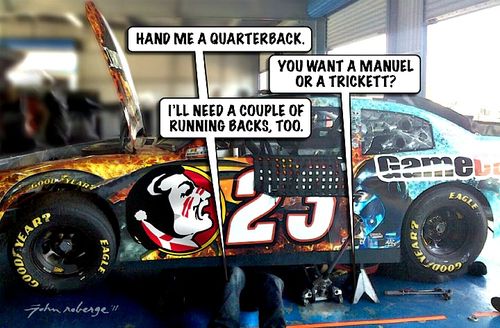 The Seminole machine is in the garage getting a tune-up for the long haul. So we can all kickback this weekend and root for some other teams to win. Like Va. Tech to bring Clemson's win string to a screeching halt. Hokie-Hokie Hi! 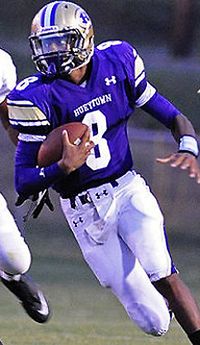 The future is suddenly uncertain. That is, the future for FSU football known as Jameis Winston -- his friends call him Jaboo -- the killer quarterback from Hueytown, Alabama. A Sports Illustrated story reveals that Winston is (no surprise) a dynamite baseball player, as well.

So is it time to commence biting our fingernails until the MLB draft and signing deadline next summer? Maybe. But at least, according to the story, Winston has established a relationship with Seminole baseball coach, Mike Martin. This isn’t the team I had been reading about since spring ball.

This isn’t the team that, all preseason long, had the swagger and the confidence reminiscent of the past.

This isn’t the team that had national championship aspirations in only year two of the Jimbo Fisher Era.

This isn’t the team that would fall prey to the “trap game.”

This isn’t the team that had such depth at running back, the biggest question was, how often would our Quarterbacks even throw?

This isn’t the team that would make so many mistakes (11 penalties for 124 yards), they would doom themselves.

This isn’t a team that would see its Senior Linebacker make numerous stupid penalties for the second week in a row, giving Clemson new life each time.

In fact, I don’t know who this team is anymore. Florida State had an amazing opportunity to keep themselves in the top 10, and go into their bye week 3-1, banged and bruised, but with heads held high and an early 1-0 record in conference play. Instead, the Seminoles limped into the time off at 2-2, and now start at a disadvantage.

Let’s face it, this team isn’t who everyone expected them to be. Earlier in the season, ESPN Columnist Pat Forde called FSU one of the perennial “over-rated” squads in college football. I, like many others that bleed Garnet and Gold, thought he was a crock. Now, I wonder just how right he was.

With rumors to the SEC running rampant, I doubt FSU could handle a schedule that could see them facing quality teams week after week, and be able to keep a high level of play. I saw one team on TV against Oklahoma, a team that looked ready to make the leap, and over the weekend, it looked like a completely different team, one highlighted by a defense that made the 2009 squad look amazing.

Simply put, last week wasn’t the FSU we all expected. On October 8th, against Wake Forest, which team will show up? Elite teams shouldn’t have to wonder, and hopefully, FSU fans won’t either.

None. Despite a solid performance by many (Bjoern Werner, Clint Trickett, et all), nobody on this team deserves individual praise from a horrible game.

Jimbo slams the door on QB controversy: "E.J. will be the quarterback"

No confusion about who FSU's man under center will be, as Jimbo answered that question decisively in today's ACC coaches' teleconference. Here are the highlights.

Is there a chance E.J. will be back next week?
"Most definitely. He’s made a lot of progress, so I feel very good -- throwing the ball and doing some things now. So we feel very good about that."

Going forward do you have a role for Trickett?
"No, E.J.’s our quarterback. Just like E.J. played terrific, you know, when he filled in for Christian. But I think you get in trouble when you do that. I think you have to identify your quarterback. And if one’s not playing well, then you know you’ve got another one to play. You know, E.J. was playing very well when he was injured. So E.J. will be the quarterback."

How hard is to give up responsibilities of calling plays as a head coach?
"I don’t think it’s very hard. I don’t want to. You got plenty of time to do it, we do it and it’s fine. Just like a lot of guys do across the country. It’s part of the game I’m always going to be interested in. Just like with our quarterbacks. Maybe down the road, maybe. But just like Coach Bowden did for all those years. All the way through 60 years old, basically. I watch film of the offense and the defense every week and (I’m) very active in what we do. And I still have time to run the team and do other things. But it’s a part of it that at least for right now, we won’t give up."

What do you think of giving freedom to the quarterbacks you coach?
"It’s something you have to do…It’s the way you coach him. The way he sees things through your eyes…When you’re calling a play what you’re trying to accomplish. That’s one of the things I thought Clint did a really nice job of last week."

Now for something completely different
(hey, it's a slow news week) 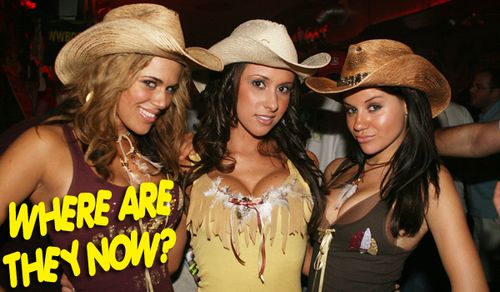 Since Nole news is kind of on the light side, here's your chance to catch up on some of Doak's most famous eye candy. Annnnd, you're welcome.

Ground game not running on all fours?
Where did it go wrong and how did we miss the warning signs? 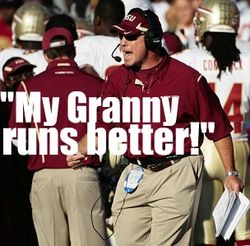 Denial. Does that fairly describe your attitude about FSU’s running offense after the first two games? How else do you explain the Kool-Aid-drinking topic avoidance after Louisiana Monroe and Charleston Southern? Blind faith the run game would kick into high gear just in time for Oklahoma and Clemson?

After all, Coach Trickett was trying to meld some veteran starters with new guys. Never mind that they had spring and fall practice to jell. These things take time, you said. So did we. So did most Nole fans who gave it a second thought.

Besides, FSU did produce 170 yards on the ground against the team from Charleston. Not bad, right?

Wrong. Not when you break it down and see there were only three runs over 10 yards. Not when a fresh Ty Jones was stopped for no gain on the second drive of the day -- worse yet, Chris Thompson is nailed for a three yard loss during the third drive.

And not when you consider that was all against THE WORST defense in Div. 1 college football. At the time, Chas. Southern was dead last in the FCS, the lower tier of D-1.

Hey, but at least true freshman James Wilder shined, ripping off 76 yards in the second half. Yep, though a closer look shows over half of it was on a 41-yard romp -- the final play of the game when out-of-gas CSU players had nothing left.

But wait, there’s more. Actually, there's less -- yardage, that is. The telltale signs were there for all to see after game one against ULM. Take away E.J.’s 28 yards of scrambling and draws, and the Noles netted only 71 yards. That includes just two runs over 10 yards (19 by Thompson and 11 by Freeman). Worse: Three running plays were stopped for no gain and another resulted in a one yard loss.

Shades of Mark McHale and Jimmy Heggins. We’ve seen that scary movie before and thought it was a distant memory. How could a pre-season top five team let its run game regress -- again -- to the bottom rung of NCAA stats? That’s the mystery hanging over the program, the acid test of the coaching staff, and the hard pill that fans can no longer deny.

Florida State at Wake Forest will kickoff at 12:30pm on October 8. According to the official ACC site, it'll be on the ACC Network/Raycom Sports. Pardon the cliche, but it applies here: "Check your local listings." There may or may not be an affiliate TV station carrying it in your market. If not, at least one web site reports the game will be on ESPN3 (aka: The Siberia of college football). Not the greatest for your viewing pleasure, but the Noles need to get back in the win column to earn prime TV kickoff times.

Danny Kanell, Is FSU back?

Danny was asked that question today on ESPNU's Palmer & Pollack show. He obviously wasn't wearing Garnet and Gold glasses when he answered:

"It almost looks like they regressed back (after Clemson). Are they back? I don’t think they are to where they’re national contenders." 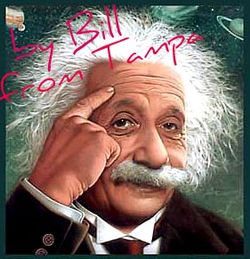 1. One consuming thought following Saturday's game at Clemson .... good God I REALLY hate the color orange!!!!!! Come to think of it, I'm not too crazy about the color purple (not to be confused with the movie) either. What does that make it now ....not since Howard Taft's presidency has FSU won in Death Valley? Sure seems like it anyway.

2. So who was it that said FSU's defense would keep them in the game? Number five defense in the country eh? Could have fooled me. Come to think of it so was FSU's defense much of the game by the Clemson offense.

3. Think about how much better FSU's passing game would be without all that hard work on improving the running game.

4. And on the Seminole's running game, FSU is well on its way towards a thousand yard rusher, which at the current rate for the leading rusher (20 something yards per game) should come somewhere in the fifth game ...... of the 2015 season.

5. Sign seen at ESPN's Gameday show: "Trickett For Heisman." We're assuming Clint and not Rick. The former we would agree with. The latter not. Mostly because I think his eligibility is used up.

6. Regarding Rashard Greene's touchdown catch, two words ..... padding .... lots and lots of padding. Who puts a brick wall inches (well it seemed like inches anyway) from the endzone?? Head butting said wall is no way to celebrate a TD.

7. Comment seen in an article about freshman receiver Sammy Watkins: "Enjoy the next 2½ seasons of Sammy Watkins." You'll pardon me I'm sure if I don't.

8. Regarding Florida State's penalty issues (that's plural), think of it from a positive point of view. How many other teams are better at keeping the other team's drives alive by committing a penalty on third or fourth down. BTW, FSU had exactly six penalties on those downs Saturday afternoon. I don't suppose we could petition the NCAA to just play first and second downs could we? Well, that was Mrs BFT's suggestion anyway.

9. And on that roughing the punter penalty .... you know, I'm pretty sure the human body is NOT designed to bend in that direction. I'm sure any chiropractors who saw that cringed.

Argggg. These trips to the Carolinas aren't getting any dang easier 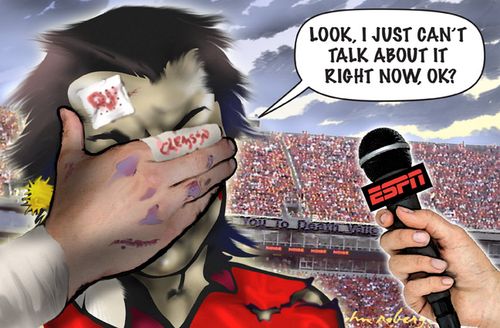