« Getting real with Leonard Hamilton: It's "virtually impossible" to pay players | Main | TomRob kicks off his 2011 previews with a look at Louisiana Monroe »

ULM Coach Todd Berry believes maturity on both sides will make it a good game Sept. 3 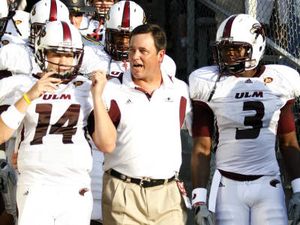 In his final thoughts from our exclusive conversation with Lousiana Monroe Coach Todd Berry, we asked what he's telling his team and what kind of game he expects when the Warhawks come to Doak for the season opener.

"We've been focused on Florida State. We practiced against Florida State (simulated) because it's our first game...I've talked to our players not in terms of winning and losing, but just going out and playing to the best that we're capable of playing. This group has responded real well to that. The one thing I know this group won't do is they're not gonna quit. We were down 17 last year against Western Kentucky in the fourth quarter and came back and won it. So they'll keep fighting and scratching. They've learned over the last year that if they play together, take ownership in the team, and just play hard that good things end up happening. And I'd like to think that because of the maturity that both teams have coming back, that it'll be a well played game."