« ULM Coach Todd Berry believes maturity on both sides will make it a good game Sept. 3 | Main | Eight weeks to get your game face on » 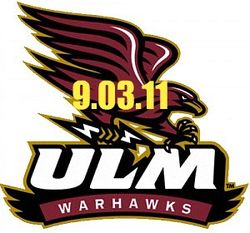 Scheme:  Todd Berry came to ULM much maligned after his awful tenure at Army. His pro-style passing attack did not work at West Point, but year one in Monroe was actually pretty successful for this offense. The good news is that ULM was good at moving the ball through the air. The bad news is that they could not run very well. Berry is hoping stealing some elements from Oregon (think no-huddle, up-tempo) will jumpstart the running game. Expect to see a little of everything from this offense—zone-read option, “air raid” passing, one back, no huddle, etc.

Quarterbacks:  Much like Jimbo Fisher did when he took over the FSU offense, Berry came in and demoted a returning, senior QB in favor of a promising, yet green youngster. Unlike Christian Ponder, ULM’s Kolton Browning had never seen the field and was an unproven freshman. All he did was provide one of the best seasons by any QB in ULM history (okay, maybe that isn’t saying a lot), and not just by a freshman. Browning (2,552 yards, 62%, 18 TDs, 12 interceptions, 385 yds rushing, 4 TDs) led the Sun Belt in completion percentage, tied a school record with 8 straight 200-yard passing games, and put up the second most total offense in ULM history. Not too shabby for a guy who had never played a down of college ball. Browning should only get better.

Running Backs:  Leading rusher Frank Goodin has graduated, but his paltry 438 yards should not be that hard to replace. ULM has three contenders for the position. Sophomore Jyruss Edwards (375 yards, 4.5 average, 4 TDs, 14 receptions, 70 yds) led the team in yards per carry and got 4 starts last year. He should at least match Goodin’s production, if not exceed it. Classmate Centarius Donald exited spring as the backup and he did get 21 carries last year, but many people watching the program think former Arkansas transfer Mitchell Bailey might be Edwards’ main competition. At minimum, Bailey is a bigger back (6-0, 224) who will likely get touches in certain packages.

Wide Receivers:  The strength of the offense, if it is not Browning, lies here. The Warhawks return 4 players who caught at least 33 passes and should field one of the best pass-catching units in the Sun Belt.

At WR, ULM has four good options in senior Luther Ambrose, sophomore Tavarese Maye, senior Anthony McCall, and junior Brett Leonard. Ambrose (65 receptions, 752 yds, 6 TDs) is a small guy, but catches everything and is good in the open field. Maye (43 recs, 505 yds, 3 TDs) and McCall (33 recs, 479 yds, 2 TDs) provide a bit more size and McCall is a big-play threat. Leonard (33 recs, 377 yds, 3 TDs) has a nice blend of size and speed. Junior Zarrell Sanders and sophomore Je’Ron Hamm can provide depth and Hamm has the best size (6-3, 214) of the corps so don’t be surprised to see him in on some jump balls.

Offensive Line:  All five starters return here, but this unit needs vast improvement. ULM allowed nearly 3 sacks per game, finishing 103rd in the country, and managed just 120 rushing yards per game and 3.1 yards per carry. If Browning and the skill position talent are to take flight, this unit has to block better.

Patrick Dvoracek and Anthony Montgomery will hold down the LT and RT spots, respectively. Dvoracek, a former Utah State transfer, is possibly the most talented of the linemen, but has had trouble staying healthy. Ryan McCaull played a little bit of everything last year, but ended the year at C and that is where he emerged in spring. Justin Roberts and Jonathan Gill are penciled in at the guard spots. Gill was the only member of the unit to start all 12 games. Due to injuries there is some depth here, but the coaching staff wants to use this group as the starting five game in and game out so their health will be monitored closely.

Scheme:  The offense plays a bit of a funky scheme and so too does the defense. Berry’s rationale is that he wanted a defense that would be hard to prepare for on one week’s notice. ULM runs a 3-3-5 that is unique. Several other schools run a 3-3-5 (perhaps West Virginia most famously), but ULM’s version is slightly different. And ULM likes to blitz more than some of the others. In fact, Berry stated that ULM will rush at least 5 players on every down and sometimes 6 or 7. The formula worked sometimes, but often ULM was torched and finished 67th in total defense and 97th in scoring defense. The main concern is size on the defensive line.

Defensive Line:   ULM allowed 159 rushing yards per game. Worse yet, opponents averaged nearly 4.5 yards per carry and scored 23 times on the ground. The worry here is that there is not enough bulk, or talent, to run an effective 3 man line.

The NG position is the center of attention in 3 man lines and it is also the worry spot for the Warhawks.  Sophomore Kentarious Caldwell is penciled in as the starter after appearing in 10 games last season as a backup. Caldwell is a former end who doesn’t appear to have the size (6-2, 254) to handle the grind of being the NG. Backup Emanuel Jeffries is a former tight end who only has 4 games of experience and doesn’t offer much better size (6-2, 266). Redshirt freshman John Nard is third in line, but his size (6-0, 280) alone may get him some reps.

Luckily for ULM, they are a bit more solid at end. Ken Dorsey and Troy Evans are both talents and are likely the best duo in the Sun Belt. Dorsey (52 tackles, 12 for loss, 5 sacks), a senior, is disruptive and brings nice size (6-0, 270) to the table. Evans, also a senior, only appeared in 4 games last year due to injury, but showed off his talent in 2009 (32 tackles, 8.5 for loss) and should form a good bookend with Dorsey. Senior Jordan Landry (14 tackles, 3 sacks) provides a good pass-rusher off the bench and three redshirt freshmen and two true freshmen who enrolled in spring are battling to provide depth.

Linebackers:  Two starters, and the two leading tacklers last year, return at LB. Senior Jason Edwards (75 tackles, 6 for loss, 2 sacks) and junior Cameron Blakes (74 tackles, 11 for loss, 6 sacks) will lead the way here. Edwards is steady and solid. Blakes is more of the big-play guy and is sent on blitzes a lot. Exiting spring, senior Lincston Jones was the surprise starter at the third spot. Jones has mainly been a special teams player and was only in on 3 tackles last year. Don’t be surprised if Jones is pushed by senior C.C. Carpenter, sophomore Ray Stovall, or even one of three incoming freshmen.

Secondary:  This is a mixed bag. The unit as a whole was decent last season, finishing in the middle of the pack nationally in pass efficiency defense, but still allowed 21 touchdown passes. The good news is that all three safeties in the 3-3-5 set return. The bad news is that ULM is young and mostly unproven at CB and they like to put their corners on an island.

The NG spot is the glaring weakness of the defense, but CB is a close second. Robert Nelson (50 tackles, 2 ints., 7 passes broken up), a would-be junior returning starter, was dismissed from the team, leaving sophomore Otis Peterson, a converted WR, as the corner with the most experience. Peterson (42 tackles, 1 int., 4 PBU) started 9 games last season and was as up-and-down as you would expect. He’ll likely draw the opponents best wideout and probably isn’t ready for such a task. With Nelson’s departure, sophomore Vincent Eddie has suddenly been thrust into a starter’s role.  Eddie (15 tackles, 2 PBU) did appear in 12 games last year, with one start, but he is smaller (5-8, 153) and will be picked on a lot. If senior Nate Brown, who moved to safety, does not move back to corner, the depth will be provided by redshirt or true freshmen.

If Brown does stay at safety, that unit may be the strength of the defense. Senior Darius Perlow returns to the “Hawk” position, which combines the duties of a traditional LB and S. Perlow (74 tackles, 2.5 for loss, 2 ints., 7 PBU) is an all-conference talent who boasts 25 career starts. Brown (29 tackles) can do him one better with 26 career starts, although he may move back to CB. Brown isn’t great at any one thing, but knows the defense and does his job. Sophomore Isaiah Newsome (37 tackles, 2 for loss, 5 PBU) rounds out the trio. Newsome, a former RB, started the final 6 games last year and proved to be a quick study. If Brown does move back to CB, expect sophomore Khairi Usher (29 tackles) to likely be the third starter. Usher was off to a good start last year, but was limited to 5 starts after an injury. If Brown doesn’t move, expect Usher to be a top option off the bench.

Special Teams:  On the plus side, senior Radi Jabour returns after hitting on 8 of 10 attempts.  Jabour’s range doesn’t extend much beyond 40 yards, but he is accurate.  ULM graduated punter Aaron Munoz and redshirt freshman Conner Fryoux is the likely replacement.

Schedule:  The non-conference slate last year was tough with Arkansas and LSU, but this year is downright brutal with road trips to FSU, Iowa, and TCU in three of the first four weeks. Only a home date with Grambling provides a respite, although ULM has struggled with FCS programs the past few years. Road dates with Troy, FAU, and UL-Lafayette will test ULM’s chances of making a run for the Sun Belt title.

Overall:  ULM has some nice pieces and returns a whopping 19 starters. The only problem, though, is that some of those starters are average at best (see the o-line especially) and some of the new starters looking worrying (NG, CB). ULM will likely put up points behind Browning and their odd scheme that will be hard to prepare for on just a week’s notice. Same goes for the defense that will likely fluster some QB’s. All the returning starters make one assume that ULM should contend for the Sun Belt title, but the question marks they have give pause. They appear to be likely to struggle along the line of scrimmage and that makes me think the conference title is unlikely. That being said, ULM should not slide into the bottom part of the conference either. The Warhawks appear to be a good team that should hover around bowl eligibility but a 7-5 season is probably the best-case scenario.