Florida State basketball appears to have found a missing piece for next season. Jeff Peterson, who's described as a pure point guard, is transfering from Arkansas. But the 6-footer will be a senior, which means one and done.

FSU will be Peterson's third team and school. He averaged 10.6 points and 4.2 assists as a sophomore at Iowa. At Arkansas last year he averaged 6.3 points and 2.4 assists in 23 starts.

Here's what Nole Hoops savant Bill from Tampa has to say about Peterson:

It was a necessity for the team to pick up an experienced point guard. Leonard Hamilton was faced with going into next season with Luke Loucks as the only player with significant playing time at that position. With Jeff Peterson having just one year of eligibility and Loucks a senior as well, obviously it is a short term fix to a problem Hamilton will have to somehow address for the 2012-2013 season. Ian Miller was thought to be that solution but with the addition of Peterson, Miller, as was the case last season, quite possibly will not see significant minutes learning that position in the 2011-2012 campaign. 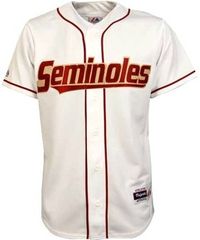 If you're looking for reasons why FSU baseball hasn't set the world on fire lately, look no further than recruiting. Over the past five years, the Noles have had one class in Baseball America's Top 25 -- and that was only a number 24 spot in 2008.

By comparison during FSU's lean recruiting years, rivals and key opponents have been feasting on the best talent not signed out of high school by the majors. Read 'em and weep, year by year.

It's always nice when a former employer gives you a great recommendation. This one comes from Florida Southern coach Pete Meyer for Mike Bell. Bell was a top-notch recruiter and pitching coach who helped build the foundation for Florida Southern's Division II national title in 2005. Meyer remembers him this way:

"His dream job was Florida State — even back then. He was a guy that had the ACC and Omaha experience and understood what we wanted to accomplish here… He was calm; he never got excited. He related well to the players. He understood talent, and he knew how to get them to play on the field." 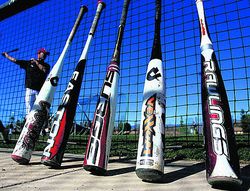 Maybe you recall hearing about those new bats mandated this year by the NCAA. You know, they’re still made of aluminum, but are dumbed down to be less lively, performing more like wooden bats. So what?

Well, many coaches believe the new bats have improved the game, restoring more of a balance between pitchers and hitters. It’s even changing coaches' strategies. Texas coach Augie Garrido says he plans to recruit faster players who can play defense and fewer big guys who hit the long ball.

And now we're seeing some actual stats attributed to the bats. A New York Times article listed these notable contrasts in Div. I between 2010 and 2011.

• With less offense, games this year were shorter by 19 minutes on average. Though some of that can be attributed to another new NCAA rule that limits time between half innings to 90 seconds, or 108 seconds for televised games.

Confessions of a former FSU pitcher

We spoke to a former Seminole pitcher familiar with this year's team about the state of FSU Baseball and changes underway in the coaching staff. Here's what he told us.

Were the pitching staff's struggles this year due to recruiting or development or what?

"I think it’s a combination of both. Every year Florida State, including the years I was there, has the talent to make the post season and compete and have a solid winning record. But there’s never a real shot talent-wise to win it all. And that does reflect on recruiting, and on development to an extent."

How does a former FSU pitcher feel about coach Shouppe stepping down?

"He was a good coach while I was there. And for me personally, even after I moved on from Florida State baseball, he’s been a friend as well. He was like family to Mike Martin, so I know it has to be tough on all of them. It had to be a tough decision. But when it comes down to it, it’s about getting that ring. It’s a business, including when you’re a player three.

"I think the move was an accumulation of pressure. Not just from this season but of years past leading up to this season. There was a level of expectation set for this team and the pitching staff this year -- how they would do and how they would compete in the post-season. And it was the straw that broke the camel’s back, as far as the decision that 11 had to make."

Do you think the new pitching coach will also be the recruiting coordinator?

"I don’t believe he’ll be named the recruiting coordinator. I think that coach Mike Martin, Jr. certainly is deserving and, I think, will be awarded the head recruiting job."

Do you believe FSU’s recruiting has slipped in recent years?

"Bluntly, I think that position by position you can find several schools in the top 25 teams that can out-match FSU, from a scout’s perspective."

If the new pitching coach makes a difference, do you think Martin will want to stick around longer?

"I think coach Martin has several years left in him as a head baseball coach. And if he can’t be a hands-on teacher and coach, the day that comes will be when he steps down. If you saw how a Florida State practice is run, you’d see what I mean. He’s hands-on, he’s all over the place. He’s not an eye in the sky. He’s on the field and the most vocal coach on that field."

"There were times Martin was involved with the staff. But for the most part it was Shouppe’s to develop. The final decision was a collective one about who would start, and who would be the first guy out of the pen, and the closer. But from a recruiting and development standpoint, it was left to the pitching coach."

In our conversation with Louisiana Monroe's Todd Berry, we've heard a lot about his offense. Today, Berry talks about the Warhawks D.

"I feel a lot better about it this year, just like I do about the offense. The majority of our defensive starters are back. The ones we lose we've probably replaced with better athletes. We've got more depth, because we're returning all the players, plus all the players behind them. We're getting back a defensive lineman who was a pre-season all-conference last year but missed the majority of the season. We've got some experience at linebacker which we didn't have last year. I like our athleticism at corner. We run well there. 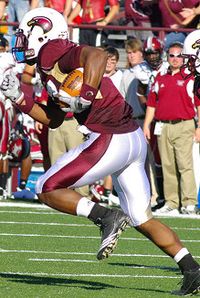 "We've got a really fine player in Darius Prelow (in photo); he was a safety for us last year. And we have a middle safety position which we call The Hawk (a linebacker/safety hybrid), and that guy really needs to be just a great field player. Last year we didn't feel we had enough depth at safety to move Darius to The Hawk position. But this spring we were able to do that. He's an NFL calibre athlete. He runs well. He's big and physical. And he's just got a great feel for the game. So we're really excited about being able to make that move. And I think our offense has certainly helped our defense, too. Our offense was more functional this spring and that created more challenges for the defense in terms of formations and execution."

Are you okay with a double standard in Florida State sports? 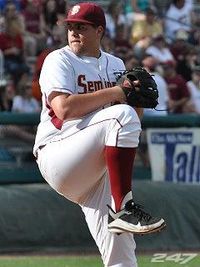 Well, this is awkward. Ugly even. FSU's good-guy pitching coach Jamey Shouppe is twisting in the wind, awaiting his fate until Randy Spetman is back in town from a European trip.

Meantime, Mike Martin appears to have all but pulled the trap door on his long-time pitching coach. Who else would be orchestrating the apparent dismissal of Shouppe in public? Spetman has indicated it wasn't him.

So could 11 be throwing Shouppe under the team bus in a desperate attempt to win a CWS before he calls it quits?

The Bigger Question. Do you want a double standard between Florida State Baseball and Football?

In football, most FSU fans wouldn't tolerate the mediocrity of 2001 thru 2009. They were tired of the perceived nepotism and cronyism. They demanded changes and got them. Not just with a new head coach, but top assistants who could recruit and develop at the highest level.

Now a guy who's much loved by fans and players in a different sport is about to be sacrificed on the altar of big-time winning.

If you take the position that coaches should be held accountable just like in business, you have a good case. The performance of Shouppe's pitchers is not up to the level of this year's College World Series teams by one very important measurement.

However, by ACC standards FSU's pitching is above average. Not the best, but good enough to challenge for the title every year.

So is good enough good enough for you? Maybe having quality coaches who develop character and graduate players, who are loyal to the school and who we just like to see back every year, is more important than being one of the top baseball schools and saving up for trips to Omaha.

Maybe not. We'll soon find out what kind of program FSU wants, when Martin hangs up no. 11 for the last time. Will his replacement be no. 4, a familar face who some fans believe deserves the job? Or will Spetman go after the best possible coach available?

As a fan, tell us which direction you believe Seminole Baseball should go in the Nole Poll at the top right.

In case you missed it, only 22 D-1 football programs made money last year 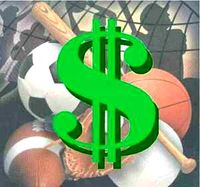 FSU wasn't one of them. According to a story in USA Today, the reptiles were one of the 22, and so was Virginia Tech. Oregon cleared the most, nearly $42 million (must be those uni's).

And a recent NCAA report on college sports revenues revealed these facts:

A reliable source in Tallahassee has told us that Jamey Shouppe is calling it quits at FSU. We're also hearing that the leading candidate to replace Shouppe is Mike Bell (shown at left during his FSU years), currently the pitching coach at Oklahoma. Bell pitched for the Noles in 1994 and '95, finishing with a career record of 14 and 4 with 120 strikeouts. Now in his fourth season at OU, Bell's staff this year posted a 3.00 ERA, the lowest at the school since 1978. In addition, four Oklahoma pitchers were named All-Big 12. It's assumed that Bell would inherit the job of recruiting coordinator from Shouppe as well as pitching coach.

A picture is worth a thousand words:
Florida State Baseball edition 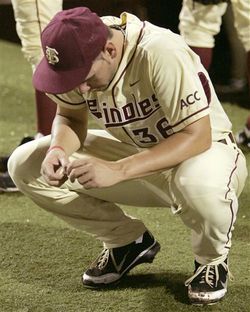 Along with frustration about FSU's pitching collapse in the regional title game, and rumors that the Noles pitching coach's job might be on the line, is this little insight. Texas A&M's coach Rob Childress is a former pitcher and was a pitching coach at Nebraska and a few other schools. His coaching is responsible for 38 pitchers being drafted or signed as free agents over the last 13 seasons. This year he had one of the nation's best trio of starting pitchers. All clues as to why A&M is going to Omaha and FSU is not.

Moral: Pitching wins games, especially against aluminum bats. Which is why it would be in the best interests of FSU for A.D. Randy Spetman to get out his checkbook and bring a Rob Childress-type to Tallahassee. A talented pitching coach who has the skills to become head coach when no. 11 retires (possibly soon, Martin himself admits). Another words, a head coach in waiting with the potential to replicate on the baseball side what Jimbo Fisher did for Seminole football.