« There's something you should know about Louisiana-Monroe and the huddle | Main | Opponent Watch: Spaziani sheds some light on what makes Boston College tick » 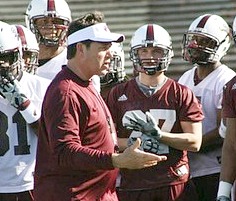 In part three of our exlcusive interview with Louisiana-Monroe Coach Todd Berry, we probe deeper for clues about what his offense will look like when he brings the ULM Warhawks to Doak on Sept. 3 in the season kickoff for both teams.

What kind of run/pass balance do you expect to have this fall?

Berry: "To be honest with you, I don't care. I know that sounds strange for a coach. And I think balance and keeping your opponent off guard is a great thing. But ideally you want to look at what the defense is giving you, based on the formations and personnel. That dictates what you should do, rather than having a run/pass percentage. So we don't go into a game saying we're going to have this many runs or passes. But then you have to look at how your own defense is playing. If they're not playing well and you get into one of those scoring matches, that means you've got to create more explosion plays. And generally the passing game will create more of those."

Speaking of which, with QB Kolton Browning's arm and maturity, will you open up the playbook to a greater variety of patterns this year?

Berry: "Most everything last year was short to medium throws, allowing him to get the ball out of his hands. But a lot of it was because so many of our offensive linemen were young, as were many of the receivers. With the return of the whole offense, along with some very good speed at the receiver position -- we've got a guy who's one of the fastest in the country -- we do want to try and throw the ball down the field more this year. And I think we're more capable of doing that than last year."

Tell us about that receiver, who'll probably be the fastest guy on the field when you play FSU.

Berry: "Luther Ambrose is who you're talking about. Unless we play the University of Florida and Demps, there's not going to be a guy out there who's faster than he is. But Florida State is a very fast team. They'll probably be faster overall than we will all the way across the board. Although we will have some matchups, like with Luther Ambrose, where we feel good lining up against anybody in the country."