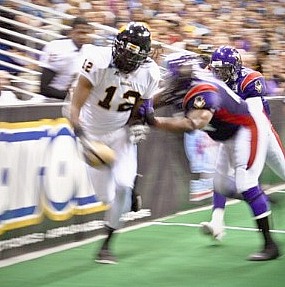 Another football season, another team for former Nole Xavier Lee. The quarterback turned tight end recently signed with the Las Vegas Locomotives of the UFL -- though Lee still needs to make the roster during pre-season camp in July.

While he dreams of returning to the NFL someday, Lee is hoping the league's player lockout continues. "I'm definitely excited about the opportunity, and if the NFL is locked out, maybe the UFL will get more attention," he told his hometown newspaper.

Lee's already had one opportunity to make it with an NFL team. The Baltimore Ravens tried grooming him to be a TE, but Lee apparently wasn't committed enough and was cut, explaining "I think I wasn't mentally ready for the position when I was with Baltimore."

It clicked for him this spring while with Pittsburgh of the Arena League (seen scoring a TD in the photo above). Lee had eight catches and 3 TDs through four games, but in mid-May was put on "recallable reassignment" so the team could activate a suspended player. That's when the UFL came calling.

If there's no NFL this fall and the UFL is the only game in town, we just might be seeing a lot of the former Florida State QB.