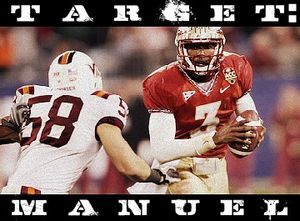 Here’s something to think about this weekend. What happens if E.J. Manuel takes it on the chin -- or the shoulder or knee -- in the heat of battle this year? And what if that separation, tear or ACL puts him out for more than a game or two?

Ah, but you’ve probably already thought about that unthinkable scenario. And, like us, you can see a promising season go down the drain.

Nothing personal, Clint Trickett or Will Secord. It’s just that shifting from a battle-tested E.J. to breaking in a new guy against teams like Clemson, Miami and the gators…well, it’s not likely to score any new hardware for the Moore Center trophy case.

It’s not as if Manuel is bulletproof. His development was slowed by missing the 2009 and 2010 spring practices.

It also wouldn’t be the first time a Seminole season was derailed by a QB injury and not-ready-for-prime-time backup.

• 1998: Chris Weinke goes out for the season with a herniated disc. Gusty backup Marcus Outzen leads the Noles to a win over the gators, but isn’t up to the task in the title game against Tennessee. A healthy Weinke could well have been the difference.

• 2004: Christ Rix sprains his ankle against Clemson, opening the door for Wyatt Sexton. Young Wyatt won a few, but then went off the reservation with the Bonnaroo incident, got pepper sprayed, then was last seen wearing a gator sweatshirt. And you thought Rix was flakey?

• 2006: Xavier Lee starts for an injured Drew Weatherford at Maryland and Noles lose by a FG. Lee would have his glory moments (the win against Bama), but proved to be another poorly prepared backup. In 2007, Lee replaced Weatherford at Wake (another 3-point loss) and reportedly was calling plays that didn't exist in the playbook.

• 2007: Drew Weatherford’s injury against Virginia Tech was instrumental in denying Bowden his 300th victory. It also thrust a deer-in-the-headlights Christian Ponder into his FSU debut.

• 2009: Ponder misses the rest of the season with a separated shoulder after trying to make a tackle against Clemson.

• 2010: This time Ponder misses the entire Clemson game due to chronic problems with his throwing arm. Manuel’s shifty running and Dustin Hopkins' last second FG save the day.

Here’s the point. As much of a weapon as E.J.’s legs are, Jimbo must keep Manuel’s designed running plays to a minimum. Save those for crucial situations, like when the game's on the line. Manuel will brave enough injury risk just from the hits he’ll take while FSU’s rebuilt OL develops into a cohesive unit.

And though they’d never admit it, every opposing coach knows that if they can take Manuel out, they’ll have FSU right where they want ‘em.

So while we’d never try to tell Jimbo how to call plays, we do have some pithy advice for E.J.:  Duck. Slide. Get out of bounds. And say a prayer before every game to ward off injury. Lord knows, every Nole fan will be doing the same.

Dillon Lee, from perennial powerhouse Buford High, is one of Georgia's hottest prospects. And he's wasting no time picking where he'll play his college ball.

According to the AJC, Dillon will announce his decision on Monday. Don't bet the farm that he chooses the Noles, though. His brother, Dallas, plays for Georgia.

However, the newspaper hints that Dillon is down to a coin flip between Florida State and Bama.

Dillon found a lot to like on a visit to FSU. “I really like the campus and whole environment there in Tallahassee," he told the AJC. The 6-4, 220 lb. LB's most recent visit was to Auburn just last week. 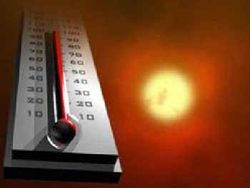 An answer to the prayers of thousands of FSU fans. The ACC announces that the Noles first three games won't kickoff at the point at which the sun crosses the local meridian. Also known as heat stroke time. And commonly referred to as Noon.

You'll still need at least one tub of SPF 50 for the Sept. 3 opener against Louisiana Monroe (3:30 kick on ESPNU). But at least the sun's rays won't be as direct, and increasing shade will make the second half more comfy for folks sitting on the pressbox side.

Kickoff for game two vs. Charleston Southern is a merciful 6pm (available on ESPN3.com). And the main event for 2012, the Oklahoma game on Sept. 17, will be ABC or ESPN's prime time game at 8pm.

Issue #2: Convenience - A bigger deal for many Nole fans is a later kickoff time more than blistering UV rays. And those who live 100 miles or more from Tallahassee are loving these later starts. FSU's athletic honchos are also breathing easier, knowing there won't be (shouldn't be) vast stretches of empty seats for games one and two.

Issue #3: Gas prices - Too bad the ACC and ESPN can't do anything about $4 a gallon gas. Tell us how much pump prices will influence your 2011 attendance in the Nole Poll on the right.

Not so fast, my friend. Keep in mind these are only early season game times announced by the ACC and ESPN. There's no guarantee that noon kickoffs won't be scheduled for any of the four games later in the season.

RB Blakely the latest to bail on Muschamp 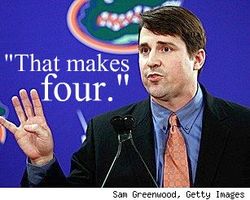 If this is Will Muschamp's honeymoon period at Florida, then it's the most turbulent since the Bride of Frankenstein discovered her new hubby might be missing a few essential parts.

Four Star running back Mike Blakely has announced he's leaving the program without playing a single down for the gators. In fact, without ever suiting up or taking a handoff. Blakely enrolled early, but missed spring practice due to shoulder surgery.

That makes four departures since Muschamp replaced Urban Meyer as head chomper. Others were WRs Chris Dunkley and Javares McRoy (both transfers), and Janoris Jenkins, the All-SEC CB who was booted for two weed arrests.

A little attrition is to be expected when a new coach installs his system and culture. But the Blakely decision is puzzling. Especially because the kid will have to sit out a year with any D-1 school he makes his new home. That's a long time between his last high school game in the fall of 2010 to September 2012, the earliest he could play his first college game.

Whatever's behind the mysterious exit, it causes a disturbing ripple through what were supposed to be calm waters and smooth sailing ever since the turbulence caused by Urban jumping ship.

How many All-Americans can you name who are known more for their off the field actions than all the yards, stats and highlights compiled during their football career?

Warrick Dunn has pretty much achieved that status with his ongoing good works. The latest was just a few days ago, when Dunn turned over the keys to a 4-bedroom house to a needy family. Just another minor miracle made possible by The Warrick Dunn Family Foundation.

Sure, Nole fans remember him for breaking gator fans' hearts. But the world knows him as a Heisman Humanitarian, one of Sporting News' Good Guys in Sports, and as an Oprah honoree.

Seems not a month goes by that we don't hear about another Good Samaritan act by Dunn. What makes it even more remarkable? It's not a public relations act. Plenty of pro players are involved in charities and do-gooder promotions, but more than a few of those aren't self-motivated. Players are plugged in as spokesmen by agents, teams and even the NFL. An appearance here, a public service announcement there, and that's about the extent of their involvement.

Not Dunn. His generosity has been non-stop since his early playing days with the Bucs -- and never to polish his public image. In fact, though his playing days are over, the philanthropy never stopped.

Not that he's totally out of football. W.D., as his former teammates still call him, became a part owner of the Falcons in 2009.

FSU has had its share of characters we'd rather forget. But when it comes to pure character, Warrick Dunn has no peers.

Terry Bell Update: DT signee on the fast track to make it to FSU by 2012

Last we heard, 2011 D-Tackle signee Terry Bell was headed to East Mississippi Community College (as reported by Tomahawk Nation). Now we've learned from Bell's high school coach, Dave Robson, that FSU "has him on a program" that could bring the big guy to Tallahassee by fall of 2012.

Robson, the coach at Tenoroc High in Lakeland, told us, "The plan is in place to get the grades and the test scores he needs to transfer to FSU -- hopefully in a year to a year and a half.  He’ll go up to East Mississippi this summer and start summer school."

EMCC has a reputation for helping kids improve their grades, graduate and move on to a four-year program. In fact, twenty EMCC players from last year's team are enrolling at a list of schools that includes Alabama, Tennessee and Memphis.

If Bell makes it to FSU in 2012, he'd have three years of eligibility with the Noles.

Coach Robson says he doesn’t think FSU coaches have any problem with his playing ability, though a year of JC ball in a good league couldn’t hurt.

“This gives him a chance to play against good competition and get used to college life,” says Robson. 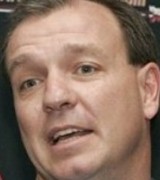 Listen as KFAN (Minneapolis sports-talk radio) host Paul Allen peppers Jimbo Fisher with a clipboard full of questions about the Vikes no. 1 pick, Christian Ponder. Allen keeps trying to find a weakness, a reason why Viking fans might question Ponder's pro potential. Jimbo convincingly dispels every doubt, revealing behind the scenes details about CP7's gutty performances and how he played through pain and adversity.

Here we've edited down to just Jimbo's interview, cutting out all the Twins talk and radio hijinx you probably don't care to hear.

Nice digs, eh? It's the new indoor practice palace at Georgia Tech, and it's much further along than the architect's rendering stage. In fact, it's scheduled to open in August (here's a photo gallery of construction progress), just in time for the Yellowjackets to use when those summer showers threaten.

You've probably heard that site preparation has begun for the Noles' own indoor facility. But the program is still waiting for one (or more) Boosters to write a check with lots of zeroes before the walls start going up.

A.D. Randy Spetman made that clear in April when he said "we are still in the fund raising process. We have not raised the money to begin phase 2 of the project."

The Chairman of Coca-Cola's $3.5 million check is making Tech's new building a reality.

Not having an indoor practice facility is one more reason for FSU to schedule gimme games early in the season. Imagine trying to prepare for, say, a season kickoff with Miami or another tough opponent when lightning storms (and Florida is the lightning capital of the U.S.) curtail practice on an almost daily basis. That could literally be a game changer.

With a little luck, Boosters will step up and the Noles will have a first class indoor practice place by 2013, the next time FSU lines up against Georgia Tech.