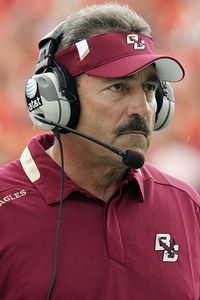 As long as the ACC maintains its division alignment, Boston College is a fixture on the schedule. But the Beantown school is so far away, FSU fans get precious little news about the Eagles. So it was nice to hear B.C. Coach Frank Spaziani on Solid Verbal’s podcast. Here are highlights from the interview, giving an insight into the team from a small private school that always gives the Noles a bruising, four quarter slugfest.

Asked if they’re already game planning for 2011 opponents.
Spaziani: “We always have to game plan. We spend a lot of time looking forward and trying to give ourselves a little edge.”

On choosing new offensive coordinator Kevin Rogers.
Spaziani: “We settled on Kevin because we’re a pro offense, and this is how we recruit and this is how it’s always been at Boston College. Kevin’s been a college coach, a pro coach. He understands what kind of offense we want to run, and he’s a great teacher…”

On concerns with this year’s offensive line.
Spaziani: “We have some nice players, some nice depth there. But these guys have not really played, been through the war…So a lot of guys are gonna have to play a little bit before their time, but so be it.”

On his defensive line philosophy.
Spaziani: “In our scheme we always need a big guy -- a B.J. Raji or Ron Brace. We’ve always had that. So we’re always looking for a size guy, you just can’t teach that…We’re not a measurables type of team, we’re all about finding football players that are certainly big enough and fast enough to play. We’ve played against some very good football teams in the years I’ve been here and some of the best defensive players have been 265 - 270. Now that doesn’t mean they made it into the NFL, but they’re good college players.”

On what separates All American LB Luke Kuechly from others?
Spaziani: “Luke is a wonder boy. There aren’t too many football players in the country like him. He could play anywhere for anybody at any time. And he’s just grown into the position. He looks like a linebacker now. He has one of those things you can’t teach -- a tremendous knack of finding the football. And he gets to it with speed, he sheds blocks…I’ve always been told when you have a great linebacker, you just line him up and don’t screw him up. And that’s what we try to do with him.”

You can listen to the entire interview on the podcast.