Jimbo lets his guard down about hopes for the 2011 season 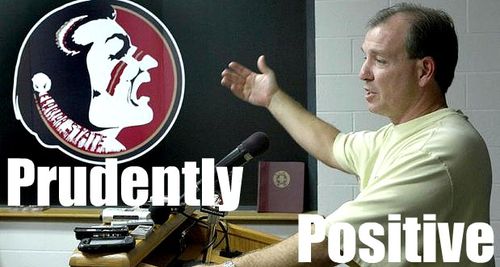 There's something different about Jimbo Fisher this spring. Instead of the usual conservative "let's-wait-and-see" coach-speak, hints of optimism are creeping into his commentary about 2011. You can hear it in this video. Even better, some of the things he said during a booster's banquet the other night, as reported by the Lakeland Ledger.

• "We can win the game on any of the three facets of the game."

• I think we're right at the edge of it, I really do. I think we'll be able to compete with most of the people out there."

• "This year, I think we can take it to another level" (speaking about the defense).

• "A few key guys don't get hurt, I think we'll be able to compete with anybody. Whether we win will depend on our mentality and how we can deal with adversity."

In fact, the only negative thing Jimbo had to say was about the possibility of a college football playoff system. On that topic he was frank and surprisingly cynical: "The NCAA wants a championship game and they want playoffs, and you know why? Because they want the money."