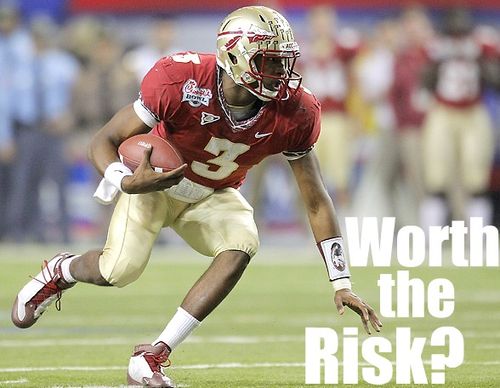 In response to our previous opinion that E.J. Manuel is too valuable to risk on frequent running plays, guest columnist Adam Tolliver of the Examiner takes a different view:

"I do not think that Coach Fisher should curb the amount of designed run plays he calls in 2011 for EJ Manuel. I'm still very reluctant to classify EJ as an injury prone QB. I think he's more durable than people realize, or at least I hope he is. Consider the nature of his injuries. He missed the Spring of 2009 due to a fluke accident, where he banged his throwing hand on the helmet of a lineman. QB's drop back for hundreds of passes per week without that ever happening, but once in a blue moon someone breaks a finger. It was definitely unfortunate, but not enough to warrant concern for his overall health issues. Fast forward to the Spring of 2010, where he would miss camp yet again due to resting his shoulder after surgery. Essentially, this would be EJ's only real injury (after classifying the broken thumb as a fluke). It should also be noted that in EJ Manuel's four starts in 2009, he played with full knowledge of this injury and fought through the pain admirably. During that time, Coach Fisher did not appear to be protecting his body from impact by calling less designed run plays, so I doubt he will and don't think he should in 2011."