Minutes after Markuss Eligwe commits to FSU, spurned gators vow not to give up 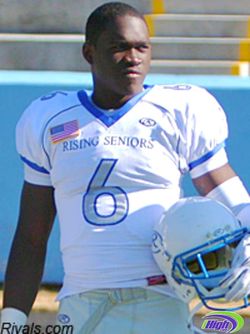 He calls himself Markuss Eligwe, but his given name is Ukeme-Eligwe. Rivals just calls him a 4-Star. And now gator recruiters will be calling him as often as NCAA rules allow.

Markuss's coach broke the news gently to a disappointed uf coach this morning, as reported by the Atlanta J-C, when they reached Coach Ferguson at Stone Mountain High School.

“Sorry I couldn’t answer a few minutes ago,” (Coach) Dante Ferguson said. “It was Florida. They wanted to know why Markuss picked Florida State over them. They said they aren’t going to give up on recruiting him.

“We’ll talk later on with [Eligwe]. I’m not going to try to talk him out of anything. If he’s happy with Florida State, then he made the right choice. I’m just going to let him know other schools are going to come after him. It’s not over. In fact, this might make even more schools come after him.”

“Florida State is getting a young man who is very smart in the classroom and on the football field,” Ferguson said. “He’s a born leader.  He can take over a football game. He’s going to be 6-4 — and as fast as he is, that’s scary.”

Markuss sent signals of maturity and character when he spoke about his intention to major in criminology at FSU: "Great education there and I value mine dearly.”

And the hits just keep on coming.