« What do the Jersey Shore kids and the Hurricanes' A.D. have in common? | Main | Will Jimbo tweak FSU's offense for E.J.? » 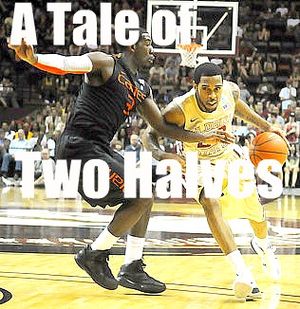 This season Florida State was 16-0 when leading at the half. And that trend looked like it would continue as the Seminoles thoroughly dominated the Miami Hurricanes over the first twenty minutes on both ends of the court.

Then came the second twenty minutes.

Leading by twenty points at intermission, 36-16, Florida State saw its lead nearly evaporate on a barrage of circus like three pointers as the ‘Canes closed to within three, 62-59, with just under a minute to play.

But thanks to a very timely bucket by Okaro White and a defensive effort by Michael Snaer on the subsequent inbound play that forced Miami to call its final timeout, FSU held on for what Leonard Hamilton described “as close to a must win as you can get,” winning by the score of 65-59.

The Seminoles were rolling early, jumping out to a 16-2 lead on the strength of four three pointers, two each by Snaer and Deividas Dulkys forcing Miami to call timeout to regroup.

By the first TV timeout the ‘Noles were 6-8 from the floor (75%) including all four of their three point attempts. On the flip side the Seminoles defense held Miami to just 1 of 6 (17%).

It didn’t get any better for the visitors from south Florida as FSU stretched out the lead to as much as 22 points. White did most of the damage, scoring 10 of his team high 17 points over a span of 4:08.

And still the ‘Canes were unable to put the ball into the basket, with the Seminole defense shutting down every lane and contesting nearly every shot.

Miami finished the half shooting just like they had started, at 17%.

“The first half was as flawless a defensive effort as I have ever seen us play,” Hamilton said.

Miami ditched its 2-3 zone defense, something Hamilton said they anticipated, and went to a man to man defense. The result was two turnovers by FSU on its first two possessions.

Offensively UM found a way to solve the stingy Seminole defense by getting the ball into their 300 plus pound center, Reggie Johnson. Three straight point blank layups and a hook shot by Johnson made it 39-24.

But despite the lead, clearly the Seminoles had lost their mojo in the second half, shooting at one point just 21%, and saw the Hurricanes connecting on 60% of their attempts.

“We had a hard time defensively,” Hamilton commented. “”Miami had a great game plan.”

“We realized Miami would go man being down by 20 points. We just became a little unsure of ourselves and started walking the ball up the floor.”

With FSU struggling but seemingly still in control, Miami started launching three pointers left and right, clanging them in from everywhere.

Adrian Thomas banked one followed by three points at the free throw line by Malcolm Grant, fouled outside the arc by Dulkys.

After Derwin Kitchen made a jumper just inside the arc to give FSU a 61-50 lead, Miami banked in back to back threes to close it to 61-56.

FSU had a chance to make it tougher on Miami when the ‘Canes picked up their tenth foul of half, sending Kitchen to the line. Instead the Seminoles made it tougher on themselves when Kitchen missed both and Bernard James made one of two.

“They were hitting threes from the parking lot,” Hamilton mused afterwards.

Grant banked an NBA-range three pointer from above the arc over the outstretched arms of Snaer to make it 62-59 with 56 seconds remaining, enough time to pull off the comeback.

That’s when White made a great head fake on the on rushing Miami defender, letting him sail by and giving the freshman from Clearwater a chance to dribble to the right elbow, whereupon he calmly banked in the shot, something White said afterwards he meant to do, with thirty-three second left on the clock.

Hamilton switched up his defense allowing Miami to inbound the ball, but smothering the Hurricane shooters.

All Miami could muster was a few very long but very contested threes that did not find the bottom of the net.

James secured the rebound after Thomas’ long ball attempt, was fouled, and made one of two from the stripe to make it a two possession game and the final margin of victory.

After the torrid 58% shooting the first half, the Seminoles finished 45% from the floor.
Grant and Johnson scored 19 and 17 respectively.

Miami shot 47% in the second half and finished 32% for the game.

The ‘Noles were out-rebounded 40-31, giving up 17 offensive boards to the ‘Canes.

With the greatly needed win FSU improves to 20-8, and more importantly keeps a two game lead for third place in the ACC at 10-4 with two games to play.

Notes: The 10 wins is the third year in a row with double digit conference victories, a first since joining the ACC. The 1972 NCAA runner up team was honored at halftime, where Ron King was decked out in garnet and gold. Hamilton said he would consider breaking out his all burgundy suit sometime for a game. It was Miami's seventh loss of the season by six points or less.