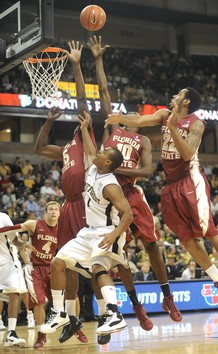 The big question coming into Saturday’s game against Wake Forest was how Florida State would perform in its first game without the injured Chris Singleton.

For the first 10:24 it appeared like the answer was not very well. The Seminoles had five turnovers, were 2 of 12 from the floor, and trailed the Deacs 14-6.

That’s when Hamilton called a timeout. And whatever he said in the huddle appeared to resonate with his players. Because when all was said and done the ‘Noles easily handled the Demon Deacons 84-66.

Most likely he said something like move the ball more, attack the basket harder, and be more patient for the perimeter shot. Before that FSU was mostly settling for long jumpers, albeit wide open ones, as Hamilton noted after the game. But they still were not going down.

Once Florida State began to drive the ball more to the rim the offense was dramatically improved with the main beneficiary of that being Bernard James, who finished with a team high 15 points on 6 of 8 shooting to go along with 8 rebounds.

Even the perimeter shots began to go down once FSU focused on getting the ball to the rim.

“The first nine minutes of the game I thought we were sleep walking," Hamilton said afterwards. The other 29 minutes I thought we executed very well.”

“We had great shots inside and outside in those first nine minutes that weren’t going down. But we became more efficient once we started moving the ball. We had better angles to drive the ball.”

The remainder of the first half saw a tight back and forth game that was tied at 30 with the ‘Noles picking up the game tempo getting out more so in transition. That is, until Terrance Shannon fouled JT Terrell way outside with a three with seven tenths of a second on the game clock. Terrell made all three free throws to go up 33-30.

Terrell returned the favor, though. Shannon threw a long inbound pass to Devidas Dulkys above the key and was fouled by Terrell while Dulkys threw up a wild off balance shot with a tenth of a second on the clock. Dulkys could only convert one of three at the stripe (apparently the extra free throw practice in warm ups Hamilton ordered for Dulkys didn’t pay off) and FSU trailed 33-31.

The second half saw the Seminoles relentlessly attack the basket. The next ten baskets by the Seminoles were either layups or slam dunks. FSU did not make a jump shot until Okaro White hit a short jumper from the left side base line at the 6:55 mark.

Wake Forest had no answer for the driving penetration of the ‘Noles. That is until the Seminoles got a little complacent and began to launch the long ball that led to long rebounds and run outs for Wake.

Back to back threes by Tony Chennault and Terrell closing the score to 69-55 prompted Hamilton to call timeout to remind his troops of the game plan.

FSU responded with renewed effort to garner a comfortable lead, 74-58, with 3:21 to play as Dulkys canned a wide open three from the left wing.

Press fouling led to mostly free throws the rest of the way, until Hamilton called off the dogs and Jeff Bzdelik felt his Deacons had had enough, prompting the inserting of the walk-ons to finish the game.

After the ‘Noles settled down, it was barely noticeable the Seminoles were without their star player. Four players reached double figures with Dulkys and Ian Miller both scoring 14 and White adding 13 to go along with James’ 15.

After the slow start FSU ended up shooting 45% and were rewarded for their aggressive play going to the line 35 times connecting on 28 (80%).

Defensively where it was believed Singleton’s loss would be felt the most, FSU clamped down on the Deacons holding them to just 33% from the floor.

So all in all it was a good outing for a first game without FSU’s star player, albeit against a favorable matchup on the road against a team that is not very good team right now.

Although, Travis Mckie, who is a consideration for ACC Rookie of the Year, scored a game high 20 points and 8 boards.

With the win Florida State improves to 19-7, 9-3 securing a winning ACC conference record for the third season in a row, a first in FSU history and is just the fourth series season sweep of the Deacons.

On a related note, Virginia knocked off Virginia Tech opening up a two game lead for FSU for third place in the standings. Hamilton commented before today’s game that the Hokies would be unable to play much zone defense against the Cavaliers.“ Too many three point shooters.” He proved to be correct as the Cavs connected on 11 three pointers.

FSU will head out on the road once again traveling to Maryland to take on the Terrapins Wednesday night at 9 PM.