« Does No Singleton Mean No Dance? | Main | What do the Jersey Shore kids and the Hurricanes' A.D. have in common? » 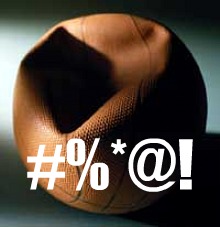 Too little offense and not enough defensive stops when the Seminoles needed them resulted in Leonard Hamilton’s seventh consecutive loss at Maryland, this time falling to the Terrapins 78-62.

But more so was the lack of defense by FSU in allowing the Terps to shoot 52%, with freshman Terrell Stoglin leading five Terrapins in double figures with 17 points.

“That was not typical of how we play defense,” Leonard Hamilton said afterward.

“We lost the game on the defensive end and therein lies the demons that raised their ugly heads in this game tonight.”

The ‘Noles did a decent job in holding leading scorer Jordan Williams to 11 points with Bernard James, Terrance Shannon, and Jon Kreft managing to hold the sophomore sensation mostly in check.

But it was Stoglin, Adrian Bowie in the first half, and Dino Gregory in the second half with 12 of his 14 points in the second period, who beat FSU with off the dribble or with wide open jump shots.

That was something Hamilton made mention of in the pre-game show in that FSU could not just concentrate solely on Williams and forget about the other shooters the Terps had. Unfortunately they did, as far too many shots taken by Maryland were of the wide open variety.

Of note was the 7-14 three point shots the Terrapins made that disappointed Hamilton.

“Gary Williams said this was the best game his team had played all year,” Hamilton commented. “I feel we contributed to that … Maryland is not known as a three point shooting team.”

Case in point, Maryland was 0-1 from the arc in the entire game vs. NC State last Sunday night.

FSU started out the game on fire with Deividas Dulkys scoring the ‘Noles first 9 points for a 9-2 lead, a lead the Seminoles would hold until the 10:30 mark. A series of possessions later on resulted in turnovers or contested off balance shots that had little chance of going down.

After connecting on over 50% in the first several minutes of the game, the shooting percentage slowly slid down to 40% as the ‘Noles struggled to solve the 3-2 flat zone Maryland employed falling behind 34-25.

Eventually, though, FSU began to solve the defense, getting the ball inside with the ‘Noles final six baskets coming from point blank range. The longest was Derwin Kitchen’s running floater in the lane to bring the Seminoles within one, 38-37, in the last half minute of the half.

It was Maryland with that one point lead, however, that came out on fire in the second half. Stoglin’s jumper just inside the arc on the left side baseline gave the Terps a 46-39 lead at the 16:00 mark.

That lead stretched into double digits, 57-45, when Gregory made a jumper from the same spot with 10:49 to play.

The Seminoles could never get the lead below twelve as each FSU score was matched by the Terps.

Any hope of winning the game dissolved when Okaro White missed both free throws, with FSU trailing 69-55 and 2:42 to play. Stoglin came down in transition to nail his third three pointer of the game, boosting Maryland’s lead to 72-55.

Essentially the game was over at that point.

The Seminoles shot the ball decently enough at 43%, led by Kitchen’s 16 points. Dulkys finished with 14 and Terrance Shannon added 12.

But noticeable in the box score was just one shot taken (and a missed one at that) by Bernard James, who scored just three points.

Hamilton lamented the lack of touches James had in the game and was looking for more balance that he obviously did not get.

“We go on the road into a real hostile environment and we have not responded properly.”

With the loss FSU falls to 19-8, 9-4 and fails to secure a valuable win that could seal an invitation to the NCAA tournament.

As Hamilton noted, “This loss puts a lot more importance on the game on Saturday.”

That game, in which FSU will have little time to prepare or little time to dwell on the loss to Maryland, will tipoff at 2:00 PM when FSU hosts Miami, 73-64 winners over Boston College on Thursday night.