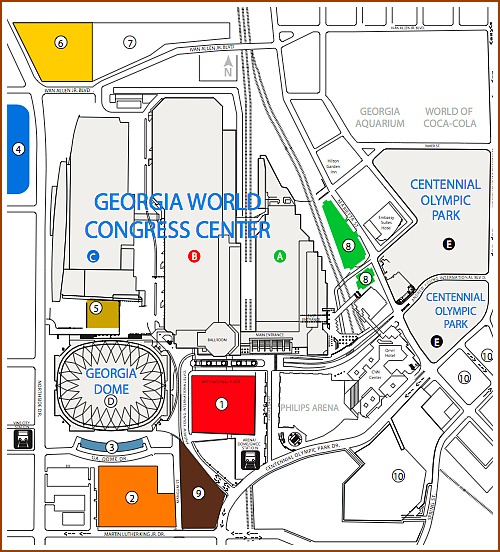 The least fun and most challenging part of your Atlanta trip will be getting to and from the bowl game. Finding a parking space near the Dome won’t be easy because of two other major downtown events on New Years Eve. A Zac Brown Band concert will pack Phillips Arena a block from the Dome. And thousands more people will crowd downtown for the annual Peach Drop, Atlanta’s version of the Big Apple event in New York. Here are your options for navigating it all.

Parking spaces are limited for The Georgia Dome (part of the Georgia World Congress Center and Phillips Arena complex). There’s a total of only 5,168 spaces in official decks and lots (colored and numbered spaces on the map). If you hope to grab one, arrive at least a few hours before kickoff. The outer lots charge $8-$10; the ones adjacent to The Dome (brown, orange, silver and red) will cost $10 or more. There are several gypsy lots in the area, but expect to pay plenty and walk several blocks.

Our suggestion: Get a parking space early, then spend a fun afternoon at the Georgia Aquarium (in the upper right corner of the map). It’s billed as the world’s largest aquarium, where you can get up close and personal with whales, sharks, coral reef marine life and tons more. And if you have more time to kill, the World of Coke is a cool family attraction that’s a bit more affordable ($15 for adults, $10 for kids). Tickets available on line at each website.

Ride a MARTA train to and from the Dome/CNN Center/Phillips Arena station (see the arrow on the route map below). Get a temporary Breeze Card for 50 cents from the vending machines at any station. Load it with at least $4 so you'll have a roundtrip ticket (one-way tickets are $2) and avoid long lines in the station after the game. Each ticket includes transfers -- and you’ll need a transfer to change trains at the central (Five Points) station. Check the route map after the jump. 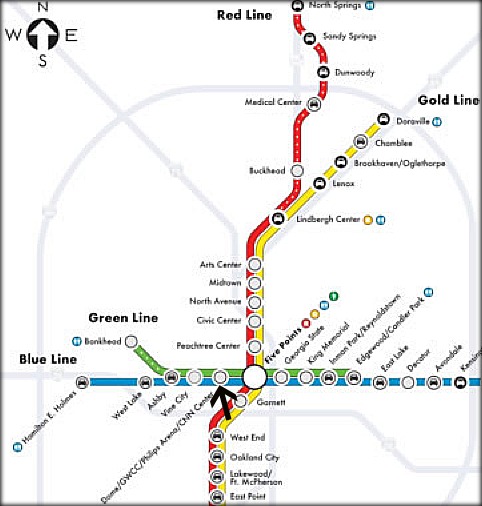 The big crush will be after the game when the throng attending all the events will flood the stations and trains. The good news: A MARTA spokesperson told us extra trains will be added to handle the load -- arriving every 7 to 15 minutes.

More good news: You can welcome in 2011 at the Peach Drop after the game and still get a train out of downtown. MARTA says service hours are extended till 2am New Year's Eve, instead of the normal 1am closing time.

Our suggestion: Take the train from a MARTA station that has a large parking lot. There's free parking for 24 hours at every station. Lindbergh Center on the Gold Line has over 2,000 spaces (that station requires you validate your ticket at machines inside). Chamblee (further north on the Gold Line) has 1,700 spaces. The Dunwoody Station has the most. It’s located at Perimeter Mall, one of the area's largest, in a safe, upscale suburb. For location and directions to all MARTA stations, click on the station name on the route map at the system site.

Google "Atlanta Taxi and Limo" for lots of choices. Not the cheapest option and trying to rendezvous with a limo or grabbing a taxi after the game won't be easy.

If you have a downtown hotel room, it’s a four or five block walk to The Dome. Spokesmen told us that downtown security will be beefed up for the night. And with thousands attending downtown events, personal safety shouldn’t be a problem, as long as you stay on main streets like Peachtree and International Boulevard.