« A guide to getting to and from The Dome and dealing with Atlanta's New Year's Eve swarm | Main | South Carolina bloggers get real: Grading the Gamecocks on both sides of the ball » 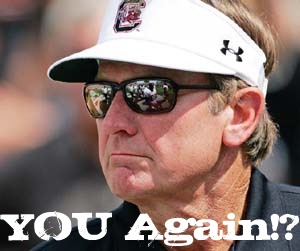 Scheme:  Lost amidst all the talk of the Fun ‘n Gun is the fact that coach Steve Spurrier really utilizes a pro-style offense that strives to achieve pretty close to a 50/50 balance between run and pass. Sure, Spurrier is known for a high-flying passing attack, but even at Florida Spurrier liked to open up a lead early via the passing game and then rely on the ground game to close things out. Don’t think this is the first year that Spurrier has relied on the ground game (think back to guys like Errict Rhett and Fred Taylor) to win ballgames.

The Gamecocks had a pretty solid year on the season, averaging 391 yards and 32 points per game while racking up a solid 6 yards per play. They most improved on the ground, where they averaged 155.5 yards per game after barely cracking 100 yards per game in many of Spurrier’s seasons at USC.

Personnel:  At QB, junior Stephen Garcia finally seems to have come into his own. That doesn’t mean that Garcia (2,816 yards, 65%, 20 TDs, 11 ints.) hasn’t had his share of boneheaded plays and he was benched for the end of the first matchup with Auburn, but his overall body of work was much better this year than the previous two. Garcia can be rattled, but he can also be a good game manager and has toughness and scrambling ability. You just never know which you’re gonna get. A big reason for USC’s success this year has been the emergence of freshman Marcus Lattimore. Named All-SEC First Team and the SEC Freshman of the Year, Lattimore (1,198 yards, 4.8 average, 17 TDs, 26 receptions, 364 yards, 2 TDs) proved to be a difference-maker from the start and powered the Gamecocks to victory in games against Alabama, Georgia, and Florida. However, when Lattimore was bottled up (see both Auburn games) or missed time due to injury (see the inexplicable loss to Kentucky), USC faltered.  Senior Brian Maddox (338 yards, 5.5 average, 2 TDs) has been the main backup.

The Gamecocks feature a big, talented WR corps that is led by Alshon Jeffery and Tori Gurley.  Jeffery (79 receptions, 1387 yards, 9 TDs) emerged this year as a big-play threat, but also as a go-to guy. He’ll be a handful.  Gurley (42 receptions, 416 yards, 4 TDs) was the bigger threat last year, but has seen his impact diminish a bit this season. Still, he has the size and quickness to present matchup nightmares. True freshman Ace Sanders (24 receptions, 300 yards, 2 TDs) emerged from day one as a threat in the slot while sophomore D.L. Moore (15 receptions, 160 yards, 2 TDs) provides yet another big (6-4, 211) body. Senior Patrick DiMarco (15 receptions, 147 yards, 3 TDs) is a threat playing a TE/H-back role.  DiMarco is a solid blocker and has good hands.

The offensive line was one of the most improved areas of the team, although they are not elite by any stretch, allowing 28 sacks in pass protection. Still, they played very solid for the season and feature several upperclassmen. Carolina has a pretty good trio at tackle in junior Kyle Nunn and seniors Jarriel King and Hutch Eckerson. King was considered an NFL prospect, but Nunn has actually beaten him out for the LT job over the past few games. Nunn has started 6 times at LT and twice at RT while King has the other 6 starts. They may both play. Eckerson has started 11 games at RT, missing two due to injury, and has been solid, if unspectacular.  Guards Garrett Chisolm and Rokevious Watkins have been more solid, starting 12 and 13 games respectively.  Chisolm was named All-SEC Second Team. At center, sophomore T.J. Johnson has started every game in his career and is dependable. Depth is an issue as Nunn is the backup at RT and Watkins is Chisolm’s backup at LG. An injury could hurt this unit.

Scheme:  Coordinator Ellis Johnson is known as one of the best in the business and this year’s Carolina defense definitely had some solid moments, but also severe lapses against the pass. The good news was that Carolina finished in the top 5 nationally in sacks with 39 and led the SEC in run defense at just 104 yards per game (and 3.2 yards per carry). The bad news is that despite all that pressure from the front seven, the secondary was awful, allowing opponents to complete 63% of their passes for 253.6 yards per game and 22 TDs.

Johnson utilizes an attacking defense that is somewhat of a 4-2-5 look with a LB/safety called a “Spur.” Part of the reason for that was to help the pass defense and part of the reason is because the defensive line held its own at the point of attack so often. Expect a lot of nickel defenses against FSU.

Personnel:  As mentioned above, the defensive line is the real strength of this unit. At end, the Gamecocks have a nice three-man rotation with sophomore Devin Taylor, junior Melvin Ingram, and senior Cliff Matthews. At 6-7, Taylor is one of the tallest players in the country and has utilized that size and wingspan to account for 39 tackles, 12 tackles for loss, and 7.5 sacks.  Ingram and Matthews share the strongside end spot. Ingram (26 tackles, 10 for loss, 8 sacks) is third in the SEC in sacks, but is more than just a situational player.  Matthews (38 tackles, 6.5 for loss, 4.5 sacks) is a team captain who brings great experience and size to the table. While Carolina has several bodies to throw into the fray at tackle, junior Travian Robertson and senior Ladi Ajiboye see the bulk of the snaps.  Robertson (37 tackles, 10 for loss, 4 sacks) is solid against the run and has NFL potential. Ajiboye (41 tackles, 5 for loss, 2 sacks) led all interior linemen in tackles and is a space-eater and plays with good leverage.

Although technically only two LBs start, Carolina utilizes a four-man rotation here. Seniors Josh Dickerson and Tony Straughter are the starters. Dickerson (59 tackles, 6.5 for loss), at MLB, has started all 13 games and is solid, but nothing special.  Straughter (32 tackles, 2 for loss), at WLB, is undersized (6-0, 201) and hasn’t been all that productive, but doesn’t make glaring mistakes either.  Backups Rodney Paulk and Quin Smith will see plenty of time too. Paulk (32 tackles, 4 for loss, 2.5 sacks) suffered season-ending injuries in 2008 and 2009, but has stayed injury-free this year and provides nice experience off the bench. Smith (41 tackles, 2 for loss) has actually been more productive at WLB than Straughter, but also tends to be caught out of position at times.  He has the higher upside, though.

Including the “Spur” position with the secondary, Carolina uses a nine-man rotation at these five spots. At the Spur, junior Antonio Allen has emerged as the starter after sophomore Damario Jeffery started the first 3 games. Allen (64 tackles, 10 for loss, 2.5 sacks, 1 int.) is second on the team in tackles and showed big-play skills. Jeffery (31 tackles) has the better size, but didn’t produce as many difference-making plays.

At corner, USC has talent and experience, but this group has struggled overall. Sophomore Stephon Gilmore is very similar to FSU’s Greg Reid—played some solid minutes as a freshman, has lots of talent and hype, but tended to struggle with consistency. Gilmore (71 tackles, 6 for loss, 3 sacks, 2 ints.) has tons of talent, has great size and speed, and led the team in tackles, but he has been prone to double moves and getting caught looking in the backfield. He was absolutely torched in the SEC title game. The other corner has been manned by C.C. Whitlock and Marty Markett.  Whitlock (20 tackles, 1 int.) started 4 games and has good experience, but can also be inconsistent. Markett (10 tackles) made his first career start in the Florida game and has seen his playing time increase since.

When Carolina goes to nickel and dime packages, FS Akeem Auguste will shift over to CB. Auguste started the year at corner, but moved to FS when Chris Culliver (34 tackles) was lost for the year due to injury. Auguste (51 tackles, 3.5 for loss) has started 9 games at FS and done a decent job.  There was even more shifting in the secondary when FS D.J. Swearinger moved to SS after the Arkansas game and beat out incumbent DeVonte Holloman. Swearinger (62 tackles, 2 for loss, 1 int.) has proven to be a bit of an upgrade in pass defense, although he isn’t as solid in run support. Holloman (61 tackles, 2 for loss, 2 ints.) started 9 games at SS before Swearinger’s move and showed off his potential, but struggled with consistency.  Holloman is also the top backup at FS as well.

Senior Spencer Lanning handles both the kicker and punter jobs and has been solid. He has nailed 16 of 23 field goals while also averaging 44.2 yards per punt.  Carolina has missed Culliver not only at FS, but also as a kick returner, where is 3rd in SEC history in kick return yards. In his place, Bryce Sherman has averaged 20.5 yards per return. However, the punt return unit has been worse, with Ace Sanders averaging a measly 1.9 yards per return and Stephon Gillmore just 5.2 yards. Worse yet, the Gamecocks have struggled covering both kicks and punts despite special teams coach Shane Beamer’s pedigree, allowing 8.1 yards per punt return and 20.7 yards and 1 touchdown on kickoffs.

For the majority of pundits, this has been a tough game to tab as on paper the two teams are very evenly matched. The thing that worries me is FSU’s front seven and their ability to stop the run. While FSU’s stats against the run are solid, people who have been paying attention have noticed that the run defense got weaker and weaker as the year wore on and all the young players on the defensive line ran out of gas. Hopefully the time off will have allowed them to recover, but you never know. If FSU can limit (not necessarily stop) Lattimore and force USC to throw to win, that is the recipe for success. Sure, Garcia can get hot and he has solid receivers to throw to, but you don’t want to let Lattimore get rolling and win the game.

For FSU, while it would be tempting to just throw the ball all around due to USC’s poor secondary, I think it is imperative that the Seminoles do not abandon the run as USC has a good pass-rushing front four and to allow them to pin their ears back could be a bad thing.  If FSU can keep the front seven honest and not allow them to help in the passing game as much, you could see success here.

I don’t anticipate that either defense will shut down the opposing offense, but I don’t think you’ll see a super high scoring game either.  Unfortunately, I think the break probably wasn’t enough for FSU’s young defense and Carolina will likely squeak out a close win, something like 24-21.  That being said, I think FSU could just as easily win by a similar score.  This one really is a toss-up.