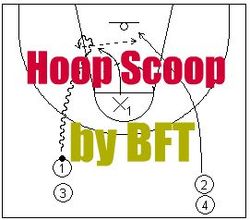 Florida State made sure the Bears settled for the three by turning the game into a block party en route to a 79-55 rout. The Seminoles recorded 13 blocked shots while beating a team by more than 20 points for the fifth time in as many outings.

The Bears attempted twenty eight shots from the bonusphere but connected on just three. But when they did try and take the ball inside, they were easily swatted away by the taller and more talented ‘Noles.

But the star of the game belonged to Gibson, who matched his career high with 17 points to go along with 7 rebounds. Just as impressive were his 4 assists and no turnovers.

That was very apparent from the start as the junior forward was the Seminole offense scoring all nine of FSU’s first points of the game. His outstanding drop step spin move off the right block gave FSU a 9-6 lead just 3:05 into the game.

Following a double clutch three pointer from the right wing by Derwin Kitchen, Gibson and Kitchen teamed up for the final play of the half when Kitchen using a high post back screen drove left down the lane and found a wide open Gibson to dish off the ball to. Gibson’s slam gave the Seminoles a 39-22 half time margin.

Mercer tried to make a game of it scoring the first two baskets of the second half.

Devidas Dulkys made sure there would be no repeat of recent games against lesser opponents, who closed the gap to an uncomfortable margin. Dulkys followed a three pointer with a jumper that kissed off the iron and found the net.

Never trailing in the game and with only one tie (4-4), FSU eventually ran the lead up to 32 when a wide open Okaro White canned a three ball with 3:48 left to play to make it 76-44 margin.

With an unusual lineup in the game Mercer was able to make the final outcome a little more respectable looking in the final minute.

Kitchen was the only other Seminole in double figures with 16 points.

Brandon Moore was the lone Mercer player in double digits with 14.

Overall the swarming FSU defense held Mercer to 25% from the floor while shooting 54%.

Another positive for Hamilton’s team was the 49 rebounds although Hamilton could not have been pleased with the 22 turnovers his team committed (four in the span of one minute). Mercer did collect 17 offensive rebounds but that was a little misleading as often the missed three point attempt caromed over the heads of the garnet and gold and into the Bears’ backcourt.

Hamilton said of his team’s miscues, “We are still trying to develop a rotation.”

“Tonight we had some things solidified. We are getting closer but we have a ways to go. I do like the unselfish spirit of this team.”