« Jimbo's "at the end of the day it’s one win" comment: Good psychology or too passive for a passionate rivalry? | Main | Easily Random and Happily Meaningless Thoughts » 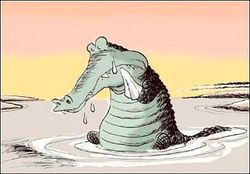 There were the fumbles that were not a result of hits, John Brantley floating balls into opposition hands, Urban Meyer and Steve Addazio struggling to get plays in, desperate 4th down plays, and a complete lack of organization and discipline. The sickness of the lack of focus has spread so far that even the equipment trainers screwed up by not bring longer cleats for the tall and slick grass in Tallahassee.
-Alligator Army

Meyer said his coaching staff will hit the road Sunday and immediately turn their focus to bringing in as many tough-ass players as they possibly can. As for whether or not he has the tough-ass coaches he needs to return UF to the top of the SEC, Meyer declined to discuss any possible changes.
--The Alligator (Student newspaper)

Florida lost to its rival, but who cares? After six years of bragging rights, Gators fans needed a little humility, and at least they didn't have to watch this happen at The Swamp. FSU was bound to win one, and there were no national title hopes or a Heisman Trophy on the line, so this is the year to get that loss out of the way.
--Gator Clause (Miami Herald)

"If there are no coaching changes, next year could be worse."

"I think Brantly would be a HEISMAN type QB if he was under the ol head ball coach. Meyer is looking for Tebow type qb's. I'm starting to wonder if it was Tim doing the coaching and not Urban." -Gator Nation message board posters