Bobby Bowden back on the sidelines again 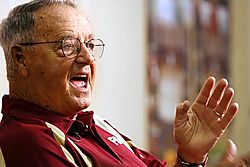 The once-winningest coach in college football will be calling plays from the sidelines again -- but just for one game. And it's a game that you won't see on your big screen.

Here's the story on Bowden's return to the coaching ranks at an "undisclosed American military installation" somewhere in the Persian Gulf. The game is part of an event sponsored by the USO and Tostitos, and includes several other football luminaries, such as Gene Stallings, Jim Kelly and Rodney Peete.

"You know, you kind of like to give back. That's what we're doing," Bobby said about his trip in January.