« Sherman Johnson: That name ring a bell? | Main | Florida State moves up to no. 4 in ESPN recruiting rankings » 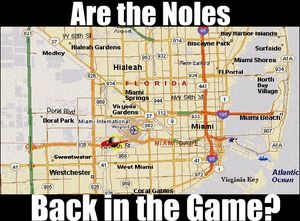 It’s been a decade since Florida State's had such a recruiting advantage over its downstate rivals. Suddenly the football gods are raining drek on UF and UM. Even upstart USF, which appeared to have a leg up at the end of 2009, is sputtering under its new coach with major name recognition.

Jimbo & Company know it’s time to strike while the recruiting iron is hot. And it’s past time for the Noles to strike gold in Miami, that sweet spot of the nation’s most fertile fields for blue chippers.

Beginning with Chuck Amato’s departure in 2000, and for most of the decade, metropolitan Miami was practically a No Man’s Land for FSU. Why? To be diplomatic, there was a cultural difference.

Post-Amato, the Noles coaching staff was mostly made up of older, Southern white men. Nothing wrong with that. Except for them, venturing into places like Carol City was as foreign as trying to recruit in Beirut. Word is, they didn’t even try. And so the number of Miami players on FSU's roster dwindled to a handful in recent years (see below).

It was only when Jimbo engineered the hire of James Coley as recruiting coordinator in 2008 that Miami was back on FSU’s map. Coley has Cuban coffee running through his veins, and can find places like Miami Northwestern without a GPS. Just what the Noles needed to re-establish a beachhead in the 305.

Sure, Amato returned in 2007, hired in part for his Miami connections. But after getting axed by his alma mater in Raleigh, “The Chest” was a broken man, as Nole fans soon discovered, who could no longer get it done in South Florida.

Now Eddie Gran has joined Coley to corral Miami thoroughbreds. And their efforts are beginning to show in FSU’s lineup. The Noles have gone from one starter who hailed from Miami (Patrick Robinson) to two this season (Xavier Rhodes and Rodney Smith). Three if you count JC transfer Mike Harris, who apparently wasn’t on FSU’s radar coming out of South Miami High in 2008.

Note that even these paltry numbers are deceiving. For example, while there were eight Miami players listed on FSU’s 2009 roster, at least three were walk-ons, and two were OL that saw little playing time under Trickett (Evan Bellamy and Brandon Davis).

Here’s a closer look at just how few Miami players (i.e., from a high school with “Miami” in its name) suited up for the Noles during the past decade (let us know if we left anybody out). Even more relevant, look at how few actually made starting lineups.

2007 - 8 players from Miami (included Anthony Leon who left for JC and is now a starter at Arkansas). 1 Starter (Patrick Robinson)

2008 - 7 players from Miami. 2 Starters including one from JC (Patrick Robinson and Corey Surrency, who wasn’t recruited out of high school)

2010 - 5 players from Miami. 3 Starters including one from JC (Xavier Rhodes, Rodney Smith, and Mike Harris)