« To beat Miami on a regular basis, FSU needs more Miami players | Main | Is there really a quarterback controversy brewing at N.C. State? (Who knew?) »

Florida State moves up to no. 4 in ESPN recruiting rankings 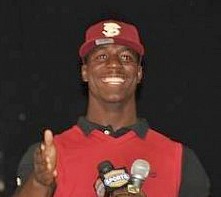 The BCS poll isn't the only one where Florida State leads all other Sunshine State teams. The Noles are up among the elite in ESPN's rankings of 2011 high school recruits. Now at no. 4 in the poll, FSU is behind only Oklahoma, Alabama and Texas.

The Seminole stock is up at ESPN despite not having a single 5-Star player among its 17 commitments. The network lists FSU with 10 4-Stars and seven 3-Star commits.

What, not even James Wilder? Nope, ESPN says he's a 4-Star. In fact, Wilder's not even FSU's highest ranked player among ESPNU's Top 150. That would be Karlos Williams, listed at no. 14. Wilder is no. 23.

Different story with Scout and Rivals. Wilder's a 5-Star on both. Plus, that player who many believe is a recruiting game-changer, is the third highest rated player in the nation on Rivals Top 100 and no. 6 on Scout's.