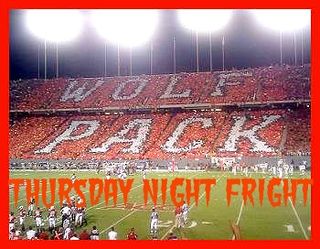 What we know: The N.C. State offense is as explosive as we thought it would be, but perhaps a bit more balanced than originally thought.  The Wolfpack have not surprised anyone by the fact that they are leading the ACC in total offense and scoring offense. Most folks figured either NC State or FSU would take that honor. What has been a bit surprising, though, is that the Pack has a bit more balance, averaging 136 rushing yards per game. That isn’t great, but the mere threat of a running game has helped the rest of the offense.

That Russell Wilson kid is decent. Wilson (2,124 yards, 58%, 18 TDs, 9 interceptions, 200 rushing yards, 2 TDs) was expected to be one of the ACC’s top QBs again and he has done that. While he has struggled a bit more with turnovers this year than year’s past, Wilson is still one of the ACC’s best and is really underrated nationally. He can carve people up.

The receiving corps is the best in the ACC. Most people figured UM probably had the best group, followed by NC State, but I think the Pack’s receivers have proven to be the best in the conference. Wideouts Jarvis Williams (27 receptions, 421 yards, 3 TDs), Owen Spencer (34 receptions, 524 yards, 1 TD), Darrell Davis (12 receptions, 118 yards, 2 TDs), and T.J. Graham (17 receptions, 278 yards, 4 TDs) are big, physical targets who also have nice speed.  Tight end George Bryan (20 receptions, 240 yards, 2 TDs) is a future pro.

What we don’t know: How will the freshmen hold up? Coach Tom O’Brien has admitted that the week off before the FSU game was helpful because the freshmen were mentally and physically exhausted. With NC State relying on true freshman Mustafa Greene (419 yards, 4.9 average, 4 TDs, 18 receptions, 166 yards) and redshirt freshman Dean Haynes (290 yards, 4 average, 3 TDs, 13 receptions, 118 yards, 1 TD) to keep the ground game going, will they wear out eventually if they are already exhausted at midseason?

Will the offensive line eventually hold this unit back? The line has done a bit better than expected, especially in the ground game, but NC State is still only averaging 3.8 yards per rush and have given up 21 sacks thus far. With the exception of senior LT Jake Vermiglio, the line is still young and prone to errors. Will they improve as the year goes on and they get more seasoning or will they continue to be just average?

What we know: This unit is a bit better, but still just middle of the pack (get it?). NC State was decent last year (55th in total defense) and they appear to be just average again.  While they did okay against middling offenses like UCF, Cincinnati, and Boston College, they struggled against Virginia Tech, East Carolina, and, to a lesser extent, Georgia Tech. The pass defense was the weak point last year and it has improved some, but this defense is still young in spots and not talent-rich.

The secondary has improved statistically, but is still young and prone to getting beat, as proven in the East Carolina game. The secondary has just two upperclassmen on the two-deep (one of those being a walk-on) and three true freshmen are playing a lot.  That has lead to some breakdowns. While statistically the Wolfpack isn’t doing terrible against the pass (202 yards per game, 54% completions, 12 TDs, 7 ints.), part of that has been skewed by playing terrible passing teams in Western Carolina, UCF, Boston College, and Georgia Tech. East Carolina, who moved to more of a Texas Tech-style Air Raid offense, torched the Pack 376 passing yards (and 496 overall) and even Cincinnati lit NC State up for 310 yards. This secondary is ripe for the taking, but most teams have utilized the running game.

What we don’t know: How will this defense hold up the rest of the year? The better offenses on NC State’s schedule are coming up. With an average pass rush (17 sacks thus far) and so much youth in the secondary, you have to think some of the teams coming up (FSU, Clemson, UNC, Maryland) can exploit this secondary. Has this unit really improved or are they the beneficiary of playing mediocre passing teams?

Can the run defense hold up? With Irving’s return, the run defense has improved and NC State can legitimately throw 8 defensive linemen into the fray and 6 linebackers and not see much drop-off in talent. However, beyond Irving and maybe Cole, this is not elite talent and NC State doesn’t have a lot of size in the front seven overall. The upcoming teams on the schedule can all run the ball pretty well and, with the exception of Wake Forest, have pretty good balance to boot. Now that they aren’t facing one-dimensional offenses, can the run defense hold up now that they can’t pin their ears back? Virginia Tech ran over NCSU for 300+ yards. That may not happen again, but I could see a few teams hitting them up for 200+.

What we know: Josh Czajkowski is still a solid kicker (12 of 15), but he has struggled a bit with chip shots. All three of his misses have come in the 20-39 range, which have usually been automatic for Czajkowski.

Andy Leffler and Jeff Ruiz have shared the punting job, but neither has been all that great. Leffler is averaging 40.4 yards per punt and has pinned 10 of his 16 punts inside the 20, but has had trouble being consistent. Ruiz is averaging just 34.8 yards per punt, but has forced 8 fair catches in his 16 attempts. Leffler is the starter for now, but they may go back and forth.

The return units have been disappointing.  T.J. Graham is averaging just 5 yards per punt return and 18.9 yards per kick return.  Watch out for blocks.  The Wolfpack have blocked 2 punts thus far, with one resulting in a touchdown.

What we don’t know: Will Czajkowski and Graham improve?  Both are too talented to be putting up such mediocre stats thus far. Czajkowski shouldn’t be missing kicks under 40 yards and Graham should’ve broken open a return or two.

Will the coverage units improve? While the punt return unit is doing okay, giving up 7.4 yards per return, the kick coverage has allowed 2 touchdown returns and that will need to be addressed.

Overall: NC State has definitely been one of the surprises of the ACC with their 5-2 record. While many people figured they would probably have another 5-7 year (myself included), this looks like a sure-fire bowl team that could get to 8 wins and contend for the division title. I think the second half of their schedule is harder than the first half and I wouldn’t be surprised if they only won 2 more games, but a 7-5 season wouldn’t be terrible after the past few years. I think the defense will be exposed in a few of the remaining games, but it appears Tom O’Brien might finally be building something in Raleigh.

The matchup with FSU is intriguing. The crowd will surely be rocking and the players will be pumped and I wouldn’t be shocked if NC State jumped out to an early lead. FSU won’t be able to completely stop this offense, but, conversely, I think the Pack will have a hard time stymieing the FSU offense. One interesting thing to note is that Wilson has thrown 8 interceptions in the last 3 games and with FSU getting more and more efficient with their zone defense, Wilson could be forced into turnovers. If NC State becomes one-dimensional, I don’t think they win this game. For FSU, I think running the ball right at the Pack will be key in quieting the crowd. Also, NC State likes to run a lot of plays so the longer FSU stays on the field, the better. This game could probably go either way, but I think FSU pulls this one out, something like 27-24.