Two Bulldogs who should put bite in Samford's game on Saturday 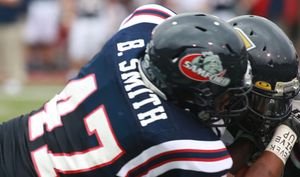 Well, Appalachian and Samford are both members of the Southern Conference (hey, we're just sayin'...). And last month the league's coaches voted a total of seven Samford players on the Preseason All-Conference team -- second most in the league, behind only App State with 14.

The coaches also chose Samford's Bryce Smith as the SoCon Preseason Defensive Player of the Year. Smith, who’s a chiseled 6-1, 245 lbs., led Samford in tackles and interceptions the past two seasons, and was the national leader in solo tackles per game, averaging 7.2. He was also first-team All-Southern Conference in 2009.

Another pre-season All-SoCon selection was RB Chris Evans. The senior is Samford’s all-time career rushing leader with 3,469 yards. Last year he became the first player in Samford history to rush for at least 1,000 yards in three-straight seasons. The Noles must watch out for Evans as a threat to snag passes out of the backfield. Last year the 6 ft. 215-pounder led the team in receptions, with 38 receptions for 172 yards.