Thanks, Sporting News and Matt Hayes 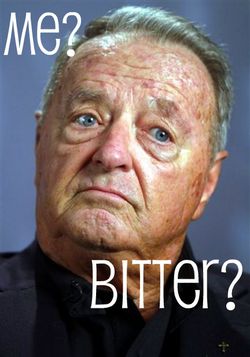 Thanks for opening old wounds on the threshold of a new season.

Your website said Hayes “sat down with Coach Bowden earlier in the summer.” But you held the story until now  -- obviously to create buzz that will sell magazines.

So just when most FSU fans appeared to be over it, Bowden’s comments may once again divide us. Especially with the Sporting News story’s spin being the familiar tsk-tsk of cruel, heartless elder abuse.

How could Florida State dump a legend, breaking a “promise” of one more season.

Because the situation had reached a tipping point, that’s how. An apparent majority of FSU fans had let it be known that they wouldn’t wait another year for change. That their check for 2010 season tickets would not be in the mail.

So T.K. Wetherell took one for the team. Bowden’s former player made the difficult decision that in the end FSU Football was a bigger priority than a near life-long relationship with his old coach. Even more important than T.K.’s own legacy as FSU President, knowing he’d be vilified by Hayes and countless others for being the meany that broke Bowden’s heart.

Then again, it was T.K. who painted himself into a corner by creating the Coach in Waiting scenario. A deal that Bowden not only didn’t sign off on, he apparently was unaware of the $5-million buyout that gave it teeth.

As for Bowden? We love you, Coach. And we’d love you even more if you hadn’t consented to an interview you knew would be fishing for any juicy morsel about an awkward mess that every Nole fans appears to have put behind them.

You said you wanted to stay away from the program and not steal the limelight from Jimbo as he begins a new era. Well, bitter comments from afar are a much bigger distraction than strolling through Doak on game day.

And, sorry, but one final observation. According to Hayes you never got a Rolex watch or a cake, just “a suitcase.” Besides the fact that you said you didn’t want any fuss made when you left, you forgot to mention one thing you did receive going out the door: The $1 million check that was guaranteed at the end of your tenure at Florida State.