« Thanks, Sporting News and Matt Hayes | Main | "I’m really pulling for Jimbo Fisher and his staff to have a great year" » 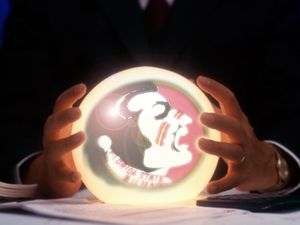 by Wild at Heart Nole

Best Case W - L Scenario? Since I would say FSU is capable of winning any game they are in this fall, I guess that the best case would be that they do. 12-0.

Now what do you really think the final record will be? I believe that, barring an unusual run of injuries, FSU will enter the Florida game 9-2. The Florida game is really hard to pick for me. So, flipping a coin ... 9-3 and a place in the ACCCG.

The 2010 MVP? Hard to pick against Ponder, but I will and give some love to the offensive line. However, I'm not talking Rodney Hudson. With another spring and preseason and off-season development with the new S&C and nutritionist staff, Andrew Datko would be more forecast. Honorable mentions: Greg Reid, Rodney Hudson, Christian Ponder

Breakout Player of the Year? A number of FSU fans have bashed Jeff Bowden's "jump ball" offense, but the jump ball when you have a 6-6 220 lb receiver mismatched against smaller DBs is fairly irresistible in the red zone. It can also be useful to keep the chains moving. Rodney Smith can be that kind of go-to receiver, and would seem to talented enough to be more than an update on Greg Carr.

Top Newcomer? There can be a lot of sexy picks for top newcomer, but it takes more than talent to take this prize. This is about preparation and, perhaps most importantly, opportunity.

Opportunities on offense are limited. TE depth is a concern, so opportunity may arise for Will Tye. Debrale Smiley could create his own opportunities. But likely the top newcomer will come on defense.

McCloud, Joyner and Cummings might get the opportunities, but Jeff Luc would be my pick. He has the talent. Early enrolling, he has as much time and prep with Hudson and Stoops as any returner. He entered this fall at second string, so he will see the field a lot. With Carr out and the inevitable injuries that will come at linebacker that could see Hudson shuffle the lineups, Luc will likely get some starting time this fall.

Low point of the season? Since my coin flip came up as a loss to Florida, I think that would be the lowest point to lose again to Florida

High point of the season? Ponder invited to New York as a Heisman finalist.

When the season ends FSU fans will be saying...? The less informed will publicly wonder why FSU didn't give Bobby Bowden another year to go out on a higher note. The rest will be hoping the offense line reloads, E.J. will be up for the starting job full time, and the defense builds on the 2010 successes.