« An insider's take on the team that BYU will bring to Doak, from Deep Shades of Blue | Main | Opponent Preview #4: Virginia Cavaliers » 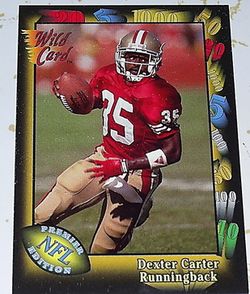 Remember Andrew Carter's recent Chopping Block with Lonnie Pryor talking about FSU's running backs learning to "understand the offensive line’s role on a given play"? The implication being that it was something new?

Carter told ChantRant that during his three years at Florida State, RB's learned blocking assignments "on the side of the line where the play is going, and especially the point of attack." He said that's what he was taught both at FSU and the 49ers, where he played seven seasons, including a trip to the Super Bowl.

He questions where the backs are finding the time to learn the finer points of the O-line: "You get 20 hours of contact. You practice five days a week during the season. Allocate two hours per day for practice. Allocate another hour and a half a day to weight lifting. You usually have only have 45 minutes to meet with your group. And something new is put in everyday. So I'm going to focus on what I need to teach my guys, not what the offensive line is learning."

Carter emphasized that the 2009 season was mostly dedicated to teaching fundamentals. "Last year I had two freshmen, two sophomores and one guy that was a junior but a JC transfer who'd been injured. So I was supposed to focus on what the offensive line was doing? My guys were still learning what steps to take, and that includes what the offensive linemen are doing at the point of attack.

"I guarantee you no running back in the NFL knows what all of his offensive linemen are doing on every play."