Bucking a trend, Dionte Allen is a Buckeye 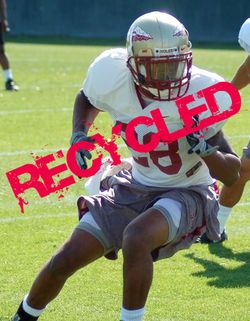 Right about now Terry Bowden is muttering, "What the...!?" Seems the favored nations status, in which FSU castoffs, misfits and odd men out are immediately shipped to North Alabama, failed to kick in.

Nope, no Div. II stardom and bus rides to Arkansas State for Dionte Allen. The former Nole DB landed a genuine big time football gig at Ohio State. Both Ken Gordon of The Columbus Dispatch and Scout.com are confirming the transfer to Buckeye country. Only drawback, of course, is that Allen will have to sit this season. Then, because he's already had a redshirt year, he'll have just one year of eligibility at OSU.

Allen was a 4-Star recruit with 4.4 speed coming out of high school in Michigan. He was one of the few bright stars in the Noles class of 2007 that went from disappointing then to disastrous four years later.

Good luck, D. Sorry it never worked out at FSU, but best of luck in Columbus.