« Just how bad do you want FSU-OU tickets? | Main | Florida State not the only ACC school with slow season tix sales »

Toughest ACC Non-Conf. schedule according to Matt Hayes of The Sporting News? 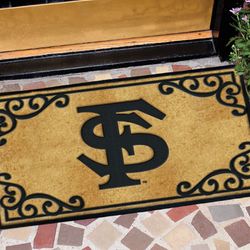 A virtual high-five and autographed picture of the late Seminole Sol to all who said Florida State. Matt Hayes' column puts the Noles on top in terms of toughness of Non-Conf. ACC schedules, though he dings FSU for playing the worst -- as in most cupcake-y -- for kicking off with Samford.

Expect this to change in coming years. The Florida State welcome mat will be out for two bona-fide pushovers each season if Jimbo has anything to say about it (and, duh, he just might).

In fact, how long before A.D. Spetman schedules the Jaguars of the University of South Alabama as a

semi-regular whipping boy? You get the best of both worlds with these new-kids-on-the-block: An easy victory (in the foresee-able future), and strong ticket sales to USA fans who'll undoubtedly follow their team down I-10 and help fill Doak.

And, who knows? If the Jags explode on the college football scene as fast as, say, South Florida, then FSU vs. USA could be an exciting non-conference rivalry a decade from now.

Update: Another ACC team will have the first crack at playing South Alabama. N.C. State is one of two Football Bowl Subdivision teams on the Jaguars 2011 schedule.