« The rise and fall of Ed Imeokparia | Main | Just how bad do you want FSU-OU tickets? » 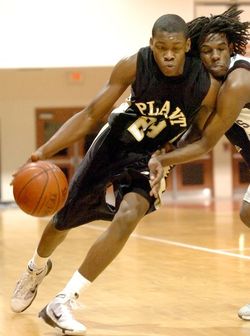 Michael Frazier of H.B. Plant High School in Tampa is a player Florida State verbally offered a scholarship more than eight months ago despite being just a sophomore.

And Frazier, a 6-4, 185 pound SG, is a player that FSU fans would really enjoy seeing play at the Civic Center.

The statistics alone tell you why. Michael is a deadly rangy shooter averaging 26.7 ppg last season and was the first 10th grader in Hillsborough County history to score more than 1,000 points in a season. In addition he added 7.8 rpg to go along with 40 steals.

Frazier is clearly not just an offensive player.

But more than his statistics is his work ethic. Frazier is notorious for his early morning (we’re talking 6 AM) thirty minute workouts every day of the week. It’s a fast-paced, 200-plus shooting workout that covers the various types of shots a well rounded shooter needs to have in his arsenal.

Add in the weight training he does three times a week.

And this is all fit into his schedule while maintaining a 4.0 GPA at what is known as one of the better public high schools educationally in the country. Academics will never be an issue for Frazier.

His play is very reminiscent of a former Seminole that everyone should recall, James Collins. Michael can hit the three pointer but also put it on the floor and attack the rim vigorously in a manner that reminds one of Collins’ days in the garnet and gold.

What will be the challenge for Frazier is how he handles the next two seasons. He is no secret weapon anymore and opponents will be looking to stop him. This will be even more of a challenge as Frazier is clearly the best player on the Panthers and on a scrappy but definitely not a powerhouse team.

Despite the lengthy involvement with Frazier, Florida State will have its work cut out for them if they hope to sign him as the competition for his services is growing.

Numerous schools have already made verbal offers to him.

Among the better known programs according to his coach, Mike Phillips, are Virginia Tech, Miami, Indiana, Michigan, Oregon, UCF, USF, many of the SEC, such as Arkansas, Alabama, Georgia, Ole Miss, South Carolina, and most recently Florida just offered him. Even Harvard has shown a great deal of interest in him.

One, Phillips is an Indiana grad. Obviously Phillips has been pitching the Hoosiers and Tom Crean is a notable coach who can probably turn the program around from the Kelvin Sampson debacle before Frazier arrives for his freshman year.

The bigger obstacles however are that Frazier is originally from Gainesville, having been born there, and has mentioned that he has always been a fan of the Gators. Lately the Gators have been recruiting him the hardest according to Frazier.

But Frazier also adds that he has no personal favorites right now and that he is just working on his game every day and not concerning himself with the recruiting process. He will have a lot of time later to make a decision.

The four star player is rated as the 8th best player in the country at his position among the class of 2012, according to Scout. Given his work ethic and talent that ranking will probably move higher.