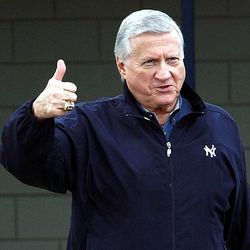 Under that gruff exterior, George was known to be a generous guy who did things for others with no thought of exploiting them for PR value. This story from the Lakeland Ledger reveals how Steinbrenner was a major supporter of college sports in his home state. It's true he probably wrote more checks to athletic programs at that school to the Southeast. But his impact at FSU, at least, was more than just monetary.

...Steinbrenner also paid to light baseball stadiums at Florida State, South Florida, the University of Tampa and Jacksonville University. And he partly funded baseball and softball fields at Eckerd College.

Martin became FSU's head coach, in part, because of Steinbrenner.

In November 1979, Steinbrenner hired Dick Howser, who had just finished a 43-17-1 season at Florida State. FSU then promoted Martin.

Howser served just one season as Yankees manager. Martin has won more than 1,600 games at FSU since 1980.

Steinbrenner also owned a Ramada Inn in Ocala, which is where then FSU coach Bobby Bowden and Barnes would stay on Bowden's spring booster tour.

The Yankees' owner, who was an assistant football coach at Northwestern and Purdue in the 1950s, always wanted to talk football with Bowden.

"Steinbrenner would wait in the lobby to say hi to Bobby when we drove in late at night," Barnes said. "Very, very impressive man."