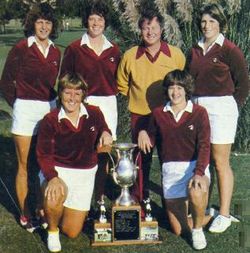 by Bob Perrone of Nolefan.org

The 2009-10 Florida State women’s golf team completed one of their finest seasons in school history. They won three tournaments, came in second twice and finished the year in 10th place in the NCAA Championships. The future looks bright for the Lady Seminoles as only two of the golfers are graduating and five of the top six will be returning.

Tenth place is their best finish so far in the NCAA tournament, but they did place higher in national level tournaments that preceded the NCAA. The NCAA did not govern women’s athletics until the 1981-82 school year and the Lady Seminoles did not join the NCAA until the next season.

Women’s golf did not become a varsity sport until 1968 when Florida State hosted the Fifth Annual Florida Intercollegiate Golf Tournament for women; however, FSU had some excellent women golfers before then.  Jo Ann Whitaker and Mary Lena Faulk are two of those golfers. They were probably good enough to make the men’s team in 1948 as they both shot close to women’s par which translated to about six extra strokes from the men’s tees. Whitaker won the Florida Women’s State Amateur Tournament that year and Faulk later joined the LPGA and became an outstanding player.