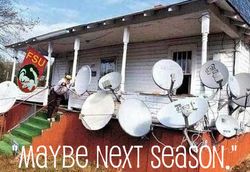 While FSU's season ticket sales are expected to hit about the same as last year, the Noles aren't the only school living with reduced expectations. At Clemson, ticket sales have dropped 13 percent since 2008, when the Tigers sold a record 58,000 season tickets. Despite winning the ACC last year, season tickets are also off at Georgia Tech by about 900.

In other Nole Nuggets, Southern Pigskin ranks Doak Campbell as only third best in Noise Level of all ACC stadiums. The subtle knock on Nole fans is that we're "laid back." Ouch, next we'll be lumped in with "arrive late, leave early" Dodger fans.

And get a load of the digs of FSU's first opponent. Samford may not be a football powerhouse, but you couldn't tell it by the facilities. Check out this tour, including the nearly 40,000 square ft. football fieldhouse.

Finally, if you're really curious about the team Samford brings to Tallahassee in six weeks, take a look inside the Bulldogs 2010 media guide.