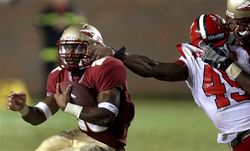 In the final part of our series with the former FSU RB Coach, Dexter Carter reveals who he believes will emerge as this year's starter behind Christian Ponder.

"When I first saw Chris Thompson, I said he's the closest thing to Warrick Dunn that I've seen. Saying that, I wouldn't be shocked if Chris is the guy who wins the starting job. Regardless of what the other backs do, I think he'll be the guy. Because he brings it all to the table -- and without any baggage off the field or in the classroom. So when you've got a player that has it, and he brings it every day, then that guy will be the guy. When the season starts, I think it'll be Chris."