Now for a little good news from FSU Baseball 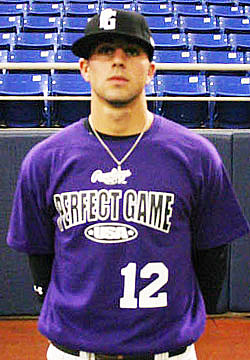 This may help cure your hangover from the Noles CWS opener. The Atlanta Journal-Constitution reports that one of the nation's top prospects is still considering Florida State over pro ball.

Kaleb Cowart, an FSU signee and the 18th pick in the recent MLB Draft, spent three days in Tallahassee this past week for freshman orientation, according to the AJC. He also hung out with Mike Martin and watched the Noles work out for their trip to Omaha.

Sure, this could just be a negotiating ploy by Cowart, giving the L.A. Angels -- the team that drafted him -- the impression he might just play for FSU if they balk at paying a $3 million signing bonus.

"The talk with (Martin) went well," said Cowart. "He understands if it works out with the Angels. If not, he would be more than happy for me to come to school."

Martin would be a lot more than happy. The 6'3" Cowart can do it all. Baseball Rumor Mill says his fastball has been clocked in the mid-90s, and he has a "hard spinning" curve. He's also a switch hitter who "shows power both ways" and "an outstanding defensive infielder."

Cowart, who's from South Georgia (Adel), swears he's undecided about playing college or pro ball. "It's still up in the air right now," he said. "We're not leaning one way or the other. It's split down the middle."

Sound like a cagey teenager who wants to get rich quick? The AJC's Prep Zone blogger, Michael Carvell, says he doesn't get that feeling about Cowart. "I really think he is going to let things work out as they may, whether it means FSU or LA."

We can only hope Kaleb is the first first-round pick who delays his MLB career to play at Howser.