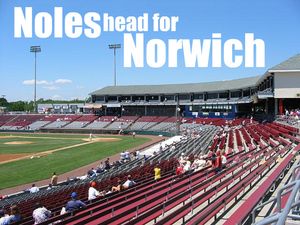 Is the NCAA still punishing FSU for that little on-line music course mess?

Not according to Tim Weiser, the guy who chairs the D-1 selection committee. Asked why the Noles, with a strong RPI and ACC championship trophy, are getting scre...er, going to New England, Weiser said:

“Having Connecticut host took up the bulk of our discussion; I'm not sure there was nearly as much debate about the Arkansas discussion as there was for the Connecticut/Florida State question...In determining host sites, the committee attempts to place Regional tournaments in different regions around the country while also rewarding teams for competitive success throughout the season. This year, the committee felt that UConn's season and location merited a host site. Florida State, while having a tremendous season, was not one of the top 8 national seeds and is in an area - the Southeast - where several other Regional sites are located.”

So, Tim, being banished to Norwich had nothing to do with the NCAA losing the records case and having to pay legal fees? Tim? Oh, Tim? (Hmm, seems like the line just went dead.)