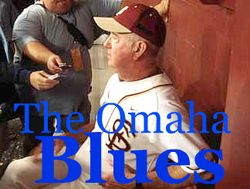 Every Florida State fan was hoping for the Seminole baseball team to complete a story book ending in Omaha at the College World Series this year. It would have been fitting to have Mike Martin win his first championship in the final season that Rosenblatt Stadium will have its lines chalked and bases painted. However, those hopes were diminished after Texas Christian plated an unlikely eight runs in the eighth inning of last Wednesday’s elimination game. The 2010 Noles’ landed back in Tallahassee from Omaha empty handed for the twentieth time in school history.

Six outs. The last six outs of the game are always the toughest ones to get. It is hard to explain why the hitters seem to get better and the strike zone smaller in the eighth and ninth innings. Unfortunately, those last six outs were FSU’s undoing in Omaha this year. The Seminole pitching staff, which had been riding high leading up to the CWS, has been a roller coaster ride all season long. The questions surrounding the rotation and the lack of dominance from a Friday night starter coupled with hot and cold spells from the bullpen had been a concern for many. These are all issues that placed the 2010 team behind the eight ball in Omaha.

The teams that make it to the CWS championship will have one or two guys that they can run out to the mound and shut the opposing team down on any given night (hence UCLA and South Carolina). On the positive side, you have to give credit where credit is due. This year’s staff had proven two things this post season: they would compete and they would never give in. Those two characteristics are what took them to the show this year. They went out each game and gave their offense a chance to win games for them. Even in the last game against TCU, the Seminole offense had the chance to make it a game with the bases loaded and one out in the bottom of the eighth inning.

From the outside looking in, you can speculate on numerous events that occurred during that elimination game that were uncharacteristic by this year’s club’s standards, from the hanging full count slider that was hit out to give TCU the lead to the defensive breakdown in the field. Basically, it boils down to the game of baseball. Sometimes the baseball gods have different plans.

Most fans said if this year's club made it to the Super Regionals they would consider the season a success. They did. Some said they would consider the season a success if this group made it to Omaha. They did. After losing game one in Rosenblatt, many said they would be content with this year’s season if the Noles’ eliminated the Gators from the College World Series. They did that too. In my opinion, this year’s club had a heck of a year and should be extremely proud of everything they achieved.