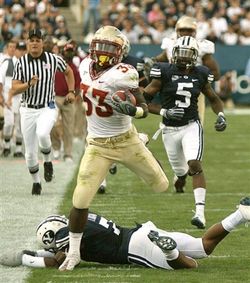 Dexter Carter has moved on from his three-year gig as FSU's running backs coach, and holds no grudges. But Carter knows talented runners when he sees them. After all, he was a star RB at FSU and went on to be a role-playing back and kick returner for the 49ers during their dynasty days. So we asked Carter to evaluate the Nole players he worked with and who he thinks will emerge to be this year's starter.

Today, the first in the series, spotlights Ty Jones.

"Ty Jones struggled to manage his diabetes. And 80% of the time his diabetes was off the charts. It was literally over 600. Now that's comatose for most older people. So we would teach him how to manage it and the importance of it, but it seemed like nothing ever got through to him.

"Now if he were the starter and you wouldn't know when his diabetes was going to hit, and he gets that diabetic fatigue, he's gotta sit, and he may be out for two days. So if he were the starter you'd have to work around him and those problems. But if he's learned to manage it and his diabetic numbers are near perfect (as suggested recently by Jimbo), there are things I saw him do on the field that you don't see done everyday. I'm talking about natural make-you-miss things like Amp Lee used to do. But Ty has tremendous power. So if he did all those things to control his diabetes, he'd be the one to beat out."